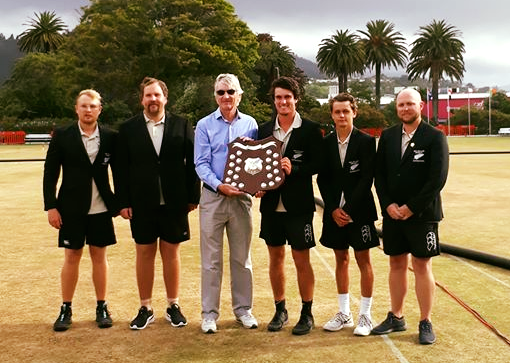 The message of the 2019 GC World Championship at Southwick was that the GC baton had passed to a new generation. This was emphatically confirmed by the dominance of the young New Zealand and Egyptian teams and, lest third-placed England be overlooked, the statistic that 13 of the 14 players in the top three teams were aged from 18 to 31.

However, the significance of this event as a potential watershed for the sport lies in the genuinely exciting manner of the New Zealand and Egyptian play. The final two days were filmed by Sky Sports Next to a very professional standard and the excellent output is freely available on YouTube. The opportunity exists for other countries to use this visual evidence to assist their own efforts to reproduce the success of Croquet New Zealand in promoting GC to its secondary schools’ population.

The venue was Nelson-Hinemoa Croquet Club in Nelson at the north end of the South Island which claims to be the sunniest place in New Zealand. The club boasts nine courts which had been prepared to offer at least 11 seconds each morning and became significantly faster as the day wore on. Coupled with stainless steels Quadway hoops, they presented a tough challenge for the players, especially when the wind got up which was a feature of the first day and several late afternoons.

The event involves eight teams divided into two seeded blocks of four. The first three days involve a round robin of one-day Test Matches of two double matches and four singles matches. The top two teams in each block advance to the championship semi-finals while the bottom two compete in a Plate event in which the main objective it to avoid coming eighth and so being relegated to Tier 2 in four years’ time.

The Plate consists of a further round robin in which each team plays the two Plate teams from the other block and the Test Match already played between each team and its fellow Plate qualifier is carried forward. The top two round robin teams then play a 9-match Test Match over two days for 5th place and the bottom two play likewise for 7th place and the right to stay in Tier 1.

As expected, Egypt and the USA dominated Block A, and both defeated South Africa and Sweden to qualify for the semi-finals. South Africa, led by the undefeated Reg Bamford, beat Sweden and so made a good start to their Plate campaign. Block B was potentially less predictable because New Zealand faced the well-matched England and Australia as well as Ireland. In the event, England beat Ireland 5-1 and Australia 4-2 before being defeated 5-1 by the home team while Australia, with the undefeated Robert Fletcher as first string, overcame Ireland.

Australia, with Edward Wilson, Pete Landrebe and Chris McWhirter, were clearly the strongest of the Plate teams and beat both Sweden and South Africa (in which Fletcher inflicted an impressive 7-3, 7-5 victory over Reg Bamford). It was no surprise when Ireland and South Africa tied 3-3 in their round two match but the expected play-off between these teams for second place failed to materialise when Sweden, who had not won a single match so far, gallantly beat Ireland 4-2 in the final round. Australia duly beat South Africa and secured fifth place but not before Bamford had gained revenge against Fletcher (and thereby inflicted the first match defeat on Robert for two decades – which is an imaginative way of referring to 2011!). In the 7/8th play-off, Ireland recovered from their Friday defeat by Sweden with a convincing 7-2 victory.

The championship semi-finals were 13-match Test Matches and provided something of a contrast. England made a good start against Egypt when John-Paul Moberly and Tobi Savage beat Amr Alebiary and Mostafa Nezar 7-5, 7-4 in the top doubles and Stephen Mulliner and Richard Bilton took the first game against Hamy Erian and Mohamed Karem 7-3. However, that was the English zenith and, although the remaining matches were highly competitive, they all went to Egypt who therefore notched up a confidence-boosting 12-1 victory. The USA fielded a mature team, albeit headed by recent GC World Champion Ben Rothman, but defied expectations by giving New Zealand an excellent run for their money. Indeed, had Rothman not failed a rather short hoop 12 in game 3 against Edmund Fordyce, the overnight score would have been 3-3 instead of 4-2 and the eventual match score of 7-6 to New Zealand might just possibly have been the other way around.

It is a GC truism that, particularly in top-level play, the game scores do not necessarily give a good indication of how a match went. On the evidence of the semi-final scores, USA should have had a distinct edge over England in the 9-match 3/4th play-off Test Match, now rendered even more meaningful by the WCF decision to award silver and bronze medals to the players in the second and third placed teams. In the event, England grabbed a 4-1 lead on Saturday and converted it into a 7-2 victory on Sunday.

However, the focus of the 70 plus spectators at the venue and a surprisingly large number of YouTube watchers was, of course, the final between New Zealand, the holders, and the mighty Egyptians. Egypt had fielded a squad of six consisting of Amr Alebiary (the Egyptian no. 1, prevented from competing in the 2019 GCWC by military service), Mohamed Karem (the 2019 GCWC finalist), Hamy Erian (2015 GCWC finalist and 2019 GCWC semi-finalist), Mostafa Nezar (2013 U21 GC World Champion), Soha Mostafa (2019 Women’s GC World Champion) and Yasser Sayed (2019 U21 GCWC semi-finalist). The first four were fielded for the semi-final and final and seemed to be equally formidable in their positioning, hooping and clearing skills. 4 to 5 yard hoops and 20 yard clearances seemed routine and it seemed obvious that New Zealand would have their hands full.

New Zealand fielded four Under 21 GC World Champions in Duncan Dixon (2009), Josh Freeth (2015), Felix Webby (2017) and Edmund Fordyce (2019). Dixon and Freeth are multiple casters while Webby casts a little and Fordyce stalks and casts but once before lashing the ball at its target with astonishing speed, accuracy and consistency when on form. The word was that all except Dixon had been a little off their best at the recent NZ Open Championship (won by Logan McCorkindale, apparently a Kiwi equivalent of Tobi Savage). Despite that, Dixon, Fordyce and Freeth seemed to be firing on all cylinders with only Webby having the odd poor game.

The scene was therefore set for an almighty dust-up of hard hitting and long hoop-running. The spectators were not disappointed, and one result was the considerable length of some of the matches. This is unsurprising when remorseless clearing can lead to a single hoop taking over 20 minutes to resolve. Saturday’s play ended at 9.20 pm with the match between Alebiary and Webby pegged down at game all and 4-4 and Egypt with a slender 3-2 lead.

Sunday began with a five-hour marathon doubles won by Egypt countered by singles wins for Fordyce and Freeth which levelled the Test at 4-4. In the remaining four singles, Webby found his best form and inflicted a decisive 7-1, 7-4 defeat on Nezar while Dixon proved too good for Erian. Suddenly, New Zealand were 6-4 ahead and game up in both the other two matches. Attention turned to the Fordyce-Karem match where Fordyce had taken the first 7-2 and was exuberantly 5-2 ahead in the second. Hoop 8 was powered through from six yards and, after a decent duel at hoop 9, Karem failed to block from short range and Fordyce hammered his black ball through from five yards. Game, match and retained title to New Zealand.

The event concluded with a courtside presentation of the Openshaw Shield to the New Zealand team by David Openshaw himself and a more formal presentation of medals and the Shield at an excellent Championship dinner.

The event was managed very smoothly. The tremendous contribution of the 85 volunteers from the host club and the Richmond and Riwaka clubs was very warmly recognised in the speeches and the hard work of John Christie, Peter Freer and Manly Bowater, the Tournament Manager, Referee and Deputy Referee respectively, was given particularly appreciation. The caterers, bar staff and ground crew worked long hours but clearly enjoyed being involved. In an unusual but very pleasant gesture, a message of thanks from the catering volunteers was conveyed to the players for their friendly and appreciative presence in the Nelson-Hinemoa clubhouse throughout the event!

Word pictures can only convey so much, and readers are recommended to enjoy the YouTube spectacle at https://www.youtube.com/watch?v=hu2iy7T6oRg.

GC is a game well suited to the fearless and the example set by the young stars of the game should be an encouragement to all to play more friendly games where the object is to have as much fun as possible by trying for outrageous shots, finding your boundaries – and then trying to extend them. New Zealand now have many secondary school players up and down the country who play in the evenings with their friends and both threaten to displace the current stars in the 2024 GC World Teams and to take a stranglehold on future U21 GCWCs and, very possibly, the GC World Championship itself.