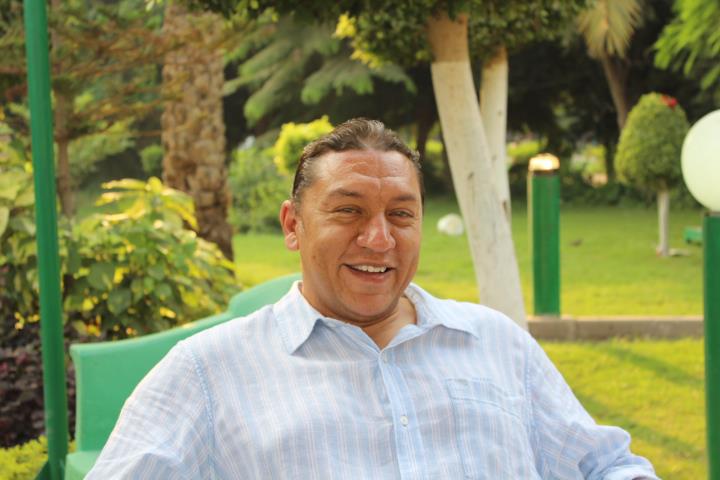 Full results are available at https://croquetscores.com/2015/gc/11th-wcf-golf-croquet-world-championship 23 year old Hamy Erian seemed to be storming in his usual calm fashion to a 3-0 victory in the GC World Championship final at Mount Maunganui on 15 February.  He took the first two games 7-4, 7-5 and Ahmed El Mahdi looked as if his shooting boots had been left at home after two days of glorious precision.  However, the 45 year old found renewed form with two 7-4 wins to make it 2-2.

Some now thought that being hauled back would depress Hamy's spirits but he quickly dispelled such fears by building a 3-1 lead with hoop 4 being made by Y on a rush-peel by R from the North boundary!  Two hoops later the lead was 5-1 and it looked as if Ahmed going to be as swiftly despatched in game 5 as he had despatched Reg Bamford in game 3 of their quarter-final.

However, hoop 7 became a huge duel which Ahmed finally won with a 5 yard hoop shot which stopped within 2 yards of hoop 8.  He not only won hoop 8 but did so after a split clearance that enabled him to send his other ball close to hoop 9 without being offside.  This allowed him to convert 5-3 to 5-4 and, after running hoop 9 yo near hoop 10,  5-5.

There was another intense duel at hoop 11 with vital clearances from both players.  The decisive moment came when, rather than clearing Y sitting near 11, Ahmed preferred to take on a 9 yard hoop shot.  Not only did he ran the hoop to lead 6-5 but the weight was such that it came to rest within 2 yards of 12.  It was the killer blow and, after two missed long clearances, Ahmed El Mahdi ran 12 smoothly from 2 yards to become the 2015 World Champion.  He had won six points in a row from 5-1 down.

Hamy Erian had done very little wrong during his opponent's extraordinary recovery and deserves huge credit for his outstanding performance during the whole event as well as in the final itself.