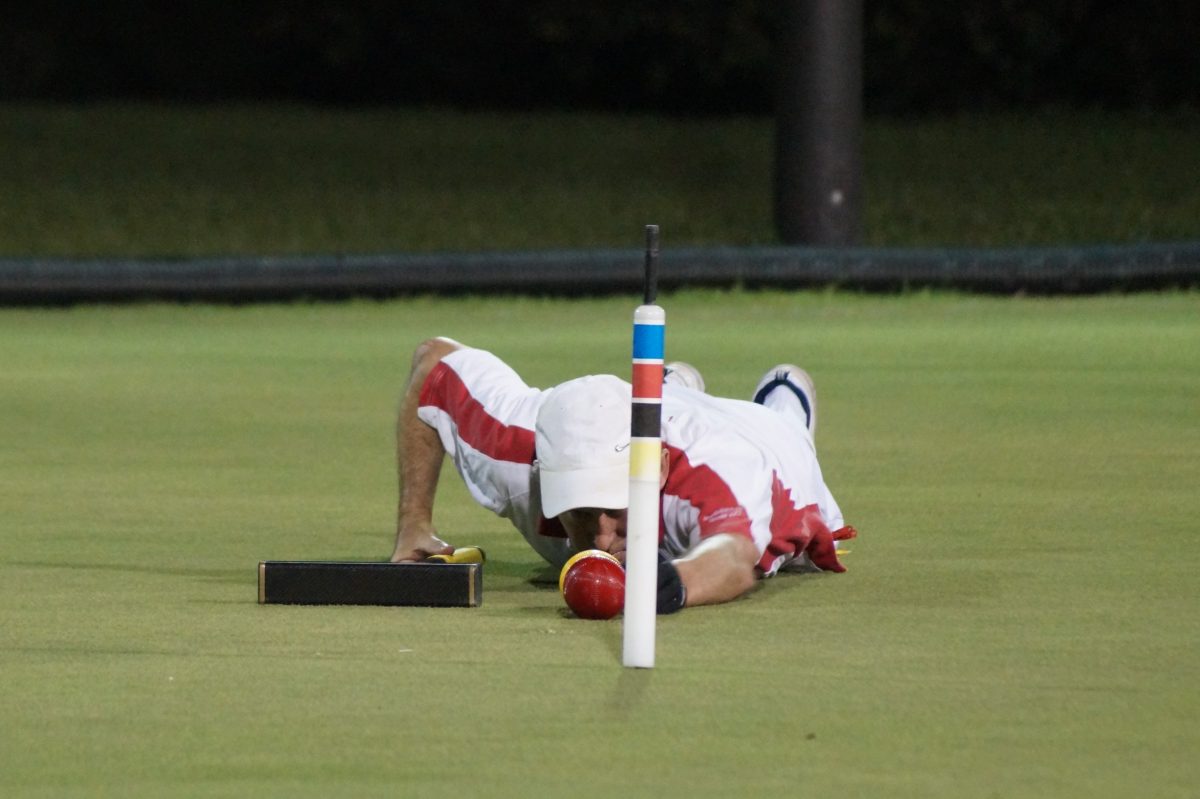 Full results are available at https://croquetscores.com/2016/ac/wcf-world-championship

Mulliner and Maloof ensured that there would be a new name on the Wimbledon Cup and, as both are 62, that the new World Champion would be the oldest ever winner, let alone for the first time.  Maloof is a professional tennis coach who has made rapid progress in US and world croquet in the last few years.  He has one of the best swings in the game and is renowned for his calmness and infrequency of error.  He had accounted for Paddy Chapman (NZE), the 2013 runner-up, and David Maugham (ENG), a stalwart of the England team, in the quarter and semi-final rounds, two major scalps.  He was a deserved winner of the first two games of the final and was tantalisingly close to winning 3-0 after over 7 hours' play in the bright Florida sunshine on a tricky court.

Mulliner discovered croquet at Cambridge University in 1975 and soon rose to the top of the Engish game, winning the President's Cup in 1981, a feat he repeated on four further occasions.  He has also won the British Open Championship three times, the last in 2000 when his opponent was none other than Reg Bamford.  Mulliner had survived close encounters with Stephen Forster (AUS) and Danny Huneycutt (USA) in the last 16 and quarter-final rounds and could easily have lost to either player.  Both matches went to a fifth game and he made it through to meet Reg Bamford (SAF), a four-time AC World Champion, and the firm favourite to make it a fifth in 2016.

Bamford soon established a 2-0 lead including an extraordinary sextuple peel in game 1 in which he overcame several probems and brought the break to a thrilling and successful conclusion.  He offered Mulliner a glimpse of hope in game 2 when a second sextuple was apparently heading for a smooth and much more routine conclusion when he failed to run a short penultimate hoop.  However, Mulliner had his own problem at the same hoop and Bamford soon made the score 2-0 in his favour.  Mulliner responded by hitting a long roquet in turn 3 of game 3 and reaching 4-back with a good leave.  However, Bamford had been in remorseless hitting form and made no mistake with the 19 yard shot down the East boundary. Shortly afterwards, he had laid up for a third sextuple and given Mulliner a 35 yard shot to stay in the match.  Lady Luck now intervened and Mulliner's shot clipped the ball he could barely see behind a hoop.  He seized his chance and completed a triple peel to win +20tp and extend the match.  In game 4, Mulliner hit in turn 4 and decided to lay for his own sextuple so that Bamford would face a 30 yard shot.  Bamford missed and Mulliner brought home a sextuple with almost as many adventures as Bamford's effort in game 1.

The fifth game was short and simple.  Mulliner hit in turn 3 and went to 4-back.  Bamford this time just missed the 19 yard shot down the East boundary and Mulliner made no mistake with a delayed triple peel to take the match and claim his place in the final for the third time in his 40 year playing career, the others being in 1997 (when he lost 3-1 to Robert Fulford (ENG) in Bunbury, Western Australia) and in 2008 (when he also lost 3-1 to Chris Clarke (ENG) in Christchurch, New Zealand).

Against Maloof in game 3, Mulliner was pegged out when for 4-back with his remaining ball.  He had to hit a 26 yard shot across court to get a chance of finishing and made two hoops before failing to approach rover.  Maloof missed a 13 yard roquet and Mulliner took this unexpected second chance by running rover and hitting a 13 yard roquet to gain an easy peg-out and stay alive in the match.  Maloof gained an early advantage in game 4 but missed a return roquet after 1-back and Mulliner was able to reach peg and penultimate against 2-back and 4-back before Maloof regained the innings with an 18 yard roquet.  Both players then hit long shots alternately but Mulliner had the last and was able to finish and level the match 2-2.

By now it was after 7 p.m. and the light was going to become an issue.  The players agreed to move to a floodlit court and have an extended warm-up on the new surface. After two early errors on which Maloof was unable to capitalise, Mulliner reached 4-back with a good leave.  Maloof missed his 18 yards roquet attempt and Mulliner calmly conducted a delayed triple peel to a successful conclusion to take the game, the match and the title.  He had been obliged to play twenty games of high-intensity croquet in four consecutive days to achieve victory and his reputation for determination, focus and the will to win could not have been more searchingly tested.

The prize-giving was conducted by David Openshaw on behalf of the World Croquet Federation, and Johnny Mitchell, the President of the United States Croquet Association.  The efforts of the officials and the large number of volunteers were publicly recognised and received great appreciation from the players and the audience.  A warm tribute was also paid to the recently late Bernard Neal who had done much to help the development of croquet in both the UK and the United States in the 1970s and 1980s.  As a committee member of the All-England Lawn Tennis and Croquet Club, it was he who arranged for the donation of the magnificent Wimbledon Cup by the AELT&CC to be the trophy for this championship.

The other medallists and prize winners were: