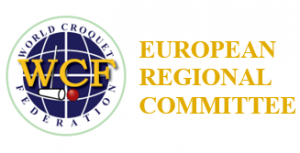 The WCF is delighted to announce, that following a recent WCF Council vote, our statutes now provide for the creation of a European Regional Committee (ERC) as a sub-committee of the WCF. The ERC will fill the gap left by the now defunct European Croquet Federation. As such it will run the European Championships and work to develop croquet within Europe.

We therefore now need to put a committee in place. In accordance with the agreed WCF statutes, this committee will consist of 5 representatives, elected by European WCF Full and Associate members (see list at end of this email). Nominations may be received from European Members, Associates or RCOs but only Full and Associate members will be entitled to vote should an election be required.

This committee will be joined on an ex officio, non-voting basis, by the members of the WCF Management Committee from European Members, one of whom will be chosen by the new elected committee as the Chair. The Chair will have a casting vote should the elected committee be tied on a decision.
Note: MC members may also choose to stand for election to the ERC, in which case they would be entitled to vote if elected.

Nominations should be made via your Governing Body who need to submit them to the WCF Secretary-General by the Closing Date of 20th February 2022. Please allow time for them to pass them on. Your application should include a brief résumé that can be used if we have more than five applicants and need to hold an election.

If an election is required, a formal Notice of Election will be emailed to the European Members together with a closing date, which will be the first Sunday four weeks later. Votes received after the Closing Date will not be counted. In the event of a tie, the decision will be made by drawing lots. Successful candidates will take office immediately.

Applicants will normally hold office for a four-year term. However, to ensure some retention and cross-over of experience, this first committee will be split into two groups:
i) 3 will remain in post until 31st December 2025
ii) 2 will remain in post until 31st December 2023
The split will be drawn by lots at the first meeting of the committee. At the end of their term, committee members may re-stand for election.

If you have any questions, please do not hesitate to ask either myself or Roberts Stafeckis who is acting as ERC Liaison in this interim period.