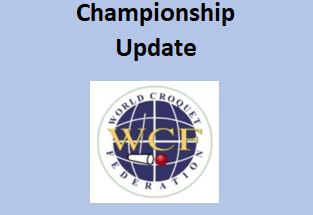 The MC has been in discussion with Croquet New Zealand regarding the three World Championships scheduled for early 2022. Current outbreaks in Australia have led to lockdowns in both Australia and New Zealand and their nationwide travel bubble is again on hold. Travel into New Zealand currently requires an expensive two week isolation in a hotel and there is little indication of when this requirement might be lifted.  Additionally, there is a clear risk that further lockdowns may be imposed in either country.

Given these circumstances and the considerable uncertainty that remains, it is felt inappropriate to try and hold any events in the first quarter of 2022 in New Zealand. Previous communications may have inferred that if there was any further delay, we would cancel some or all of these events. However, the Management Committee have considered each event separately and believe the following suggestions best meet the needs of the players and hosts:

Women’s AC World Championship: this will no longer be held in January 2022 in Christchurch, New Zealand. We are in discussion with CNZ with a view to holding the next occurrence of the event there in a future year to be confirmed.

Under 21 GC World Championship: this will no longer be held in February 2022 in Hamilton, New Zealand. We are in discussion with CNZ regarding the possibility of moving it to either later in the year or Jan/Feb 2023. This may not prove possible, and we will advise further as soon as possible.

(The intention would be that those who were eligible to play when the event had been initially scheduled in 2021 would be allowed to compete as per the previously approved temporary amendment to the Regulations (which we are aware presently only takes us to the end of 2022)).

GC World Championship: this event will no longer be held in February 2022 in Mount Manganui, New Zealand. We are considering other venues for 2022, potentially in England.

The forward calendar will be reviewed over the next few months.