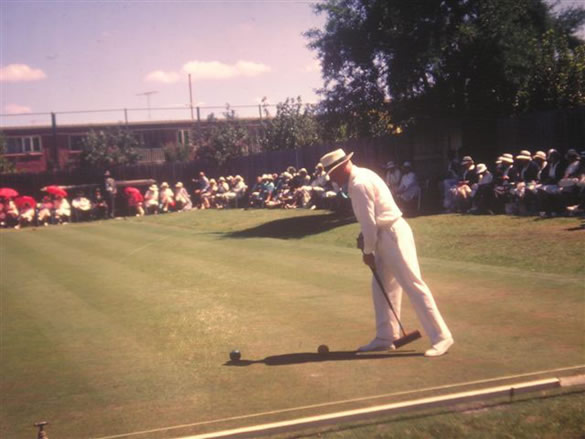 Thomas William (“Tom”) Howat was arguably the best Australian croquet player of his generation.  He won nine Australian Championships between 1955 and 1968, a total which still remains unmatched by a substantial margin.  He was also an excellent coach who freely passed on his knowledge of the game to others.

Tom Howat was a member of Brunswick and Coburg Croquet Clubs in Melbourne. He took up croquet when a pennant standard lawn bowls player.  His wife, Isobel, was a member of Brunswick Croquet Club and, when waiting for her after Bowls, he became intrigued by the techniques, tactics and challenges of the game of Croquet.  Tom was a natural player and quickly progressed through the handicap ranges to become one of Victoria and Australia’s leading players.

Tom also became Croquet Victoria’s first Director of Coaching and was instrumental in organising both the Practical and Theoretical components of its first accreditation course. He also made a major contribution to the development of a coaching video featuring the leading players Allan Cleland and John Tyrell for distribution to clubs.

Tom and Isobel invented the game of King Ball.  This is a single ball game with a croquet stroke after a ball ran the rover hoop that could be used to croquet opposition balls out of play. King Ball was the forerunner of Aussie Croquet, a single ball modified version of Association Croquet, which is now used in schools and clubs throughout Australia to introduce community groups and new club members to croquet.

Tom was noted for his great generosity in passing on his expertise to players throughout Australia. In particular, Tom’s coaching and support of John Tyrell, Alan Cleland, Owen Morgan and George Latham played a significant part in their national and international successes. George and Owen succeeded Tom as Victoria’s Directors of Coaching and his example continues to influence croquet in Victoria and Australia through those whom he coached.

Tom Howat left an outstanding legacy for croquet in Victoria and Australia.