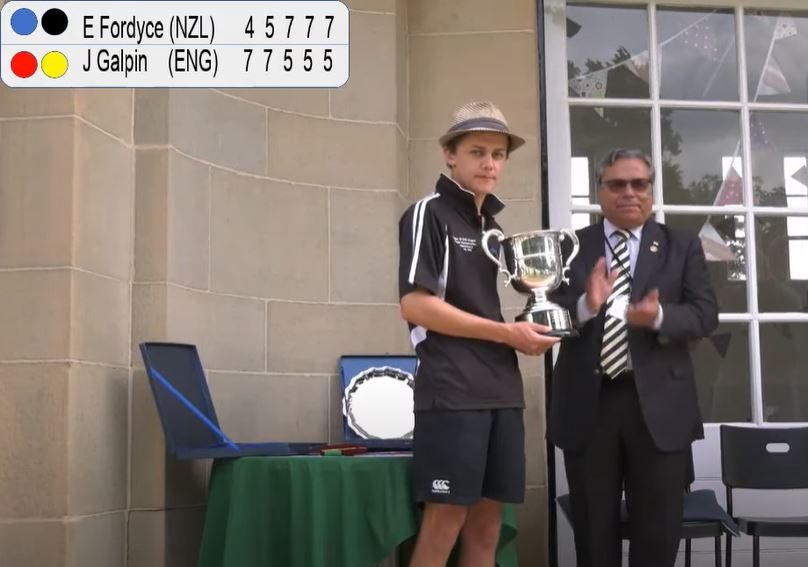 What has happened since June?

The 2019 Under 21 Golf Croquet World Championship was held at the Nottingham Croquet Club from Saturday, 20 July to Wednesday, 24 July 2019. 24 players representing Australia, Egypt, England, Germany, Latvia, New Zealand, Spain and the USA took part in an excellent event which culminated in a thrilling final between Edmund Fordyce (NZL) and James Galpin (ENG). James started strongly and took the first two games but Edmund justified his status as the pre-event favourite by mounting a determined recovery to triumph 4-7, 5-7, 7-5, 7-5, 7-5.

The 2019 Golf Croquet World Championship was held from Saturday, 27 July to Sunday, 4 August 2019 at the Sussex County Croquet Club with support from Compton Croquet Club, Royal Tunbridge Wells Croquet Club and West Worthing Croquet Club. The organisation of the event and the public relations efforts were excellent with HRH The Duke of Gloucester and Susan Pyper, the Lord-Lieutenant of West Sussex, as the Guests of Honour at the opening ceremony.

The Southwick courts were in superb condition and the large number of knowledgeable visitors were treated to a feast of excellent croquet. Extraordinarily, all four past champions from 2004 were eliminated on Thursday morning and it became clear that a new generation had arrived. In the semi-finals, two of Egypt’s young stars gave a brilliant performance with Mohamed Karem beating Hamy Erian 7-5, 7-4, 6-7, 7-3, despite Erian jumping hoop 13 from the boundary in game 3 to stay alive. In the other semi-final, Josh Freeth of New Zealand surged to a 7-2, 7-3 lead against USA’s Ben Rothman. However, Rothman refused to be dismayed and fought back to take the last three games 7-3, 7-5, 7-5.

The final was a compelling encounter in which Rothman took the first game 7-5 but then was swept aside 7-2, 7-3 by an increasingly confident Karem as the match progressed. When Karem ran a very angled hoop 9 in game 4 to take a 6-3 lead, he was within touching distance of the title. But, as in the semi-final, Rothman dug deep and produced a key 25 yard clearance at hoop 13 to square the match 7-6 and then played with great resolve to take the final game 7-5 and become the first American WCF champion. The prize-giving ended with the establishment of a new tradition – the formal handing over of the WCF flag from a representative of the Event Host to a representative of the next Event Host.

Tier 1 of the 2020 GCWTC will be held at the Nelson-Hinemoa Croquet Club on the north coast of New Zealand’s South Island from 6 to 12 January 2020. The eight competing teams represent Australia, Egypt, England, Ireland, New Zealand, South Africa, Sweden and the USA.

The 2020 ACWC will be held at the Victorian Croquet Centre near Melbourne from 15 to 23 February 2020. 76 places have been awarded and four more will be available to the top placed players in the Qualifying Tournament.

Croquet Mexico was awarded Recognised Croquet Organisation status in July. The WCF is currently in contact with croquet bodies from Greece, Iran and Pakistan.

Outlook for October and beyond

Amir Ramsis completes his second and final term as WCF President on 31 December 2019. In his eight years in office, Amir has assiduously attended most of the WCF Events in that time to welcome the players, assist with presenting the trophies and to express the appreciation of the WCF to all the Event Hosts. His enthusiasm and support for both codes of the game will be warmly remembered by all who have met him.

The main events in the next three months are the elections for the office of WCF President and for three places on the WCF Management Committee. The results of these elections will be published in early December. The MC will be engaged in the preparation of the annual reports from the Treasurer and from itself which are due to be completed and also sent to Members in December. The other key topics are the final preparations for the three tiers of the 2020 GC World Team Championship and for the 2020 ACWC.