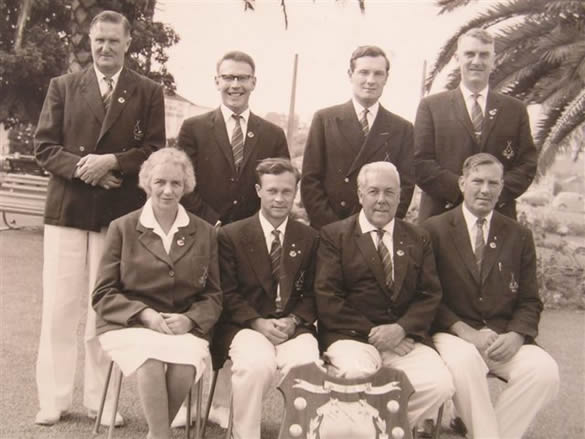 Pat Cotter graduated from Trinity College, Dublin with a degree in classics and soon joined the teaching staff at St. Paul’s school, Hammersmith, teaching Latin and Greek. .  During the second World War he was in the R.A.F. in the Intelligence division with the rank of Squadron Leader.  After the war he returned to St. Paul’s as head of classics where he remained until his retirement.

He was an international bridge player, playing regularly at Crockfords and the Devonshire and in 1938 won the World Bridge Championship.  He wrote a weekly article on bridge for the Financial Times and a monthly one for Country Life until shortly before his death. He was also a regular compiler of crosswords for the Times.

Pat Cotter was a scratch golfer and in 1947 was due to play in a competition at the Roehampton club but had sprained his ankle and wandered over to the croquet courts.  He had played a little croquet at university and after a little practice he entered a competition and his handicap was soon down to scratch. Remarkably in 1949, only having played for 2 years he was invited to play in the Presidents Cup and won it, and  went  on to win it another 3 times in the next 4 years. Thus he was the winner on 4 of his first 5 years and in 21 years won it 6 times and was runner-up 5 times.

He was regarded by Maurice Reckitt as one of the Big Three with Hicks and Solomon and was captain of the winning Great Britain team for the MacRobertson Trophy in England in 1956 and in New Zealand in 1963.  Surprisingly his number of wins in other major events was relatively few, winning the Open Singles only 3 times between 1955 and 1962, 4 Men’s titles between 1952 and 1969, and 2 Mixed doubles, though he did not play in this event very often.   He won the Open Doubles 9 times with John Solomon.

As a player he was extremely accurate with a very light touch and played with a mallet of only 2 lbs 12 ozs, which allowed him to play superb stop shots.  His rushes and split shots were very accurate. He was not a particularly good long shot, probably because he rarely hit the ball hard and even on good courts the ball would veer off line.  He was an excellent tactician and would rarely take a risky shot, preferring to bide his time until his opponent presented him with an opportunity.  He adopted the ploy of peeling his partner ball through the first hoop in his first break, thereby enabling him in his next turn to send the forward ball straight to hoop 3 ready for the triple peel which then became relatively easy and this was soon adopted by many of the better players.  His ball control on hoop running was such that he invariably achieved the rush to wherever he wanted.  He probably created a world record at the time by finishing a best of three doubles in less than one and a half hours, including a stop for morning tea, in a test match at Whangarei in 1963 with his partner Solomon.

He was also instrumental in making relationships between players much more relaxed as he called them by their first names instead of the formal Mr., Mrs, or Miss which was the norm at that time.  His book “Tackle Croquet This Way” was published by Stanley Paul in 1960 in their series on various sports and is a very concise and readable explanation of the basics of the game.