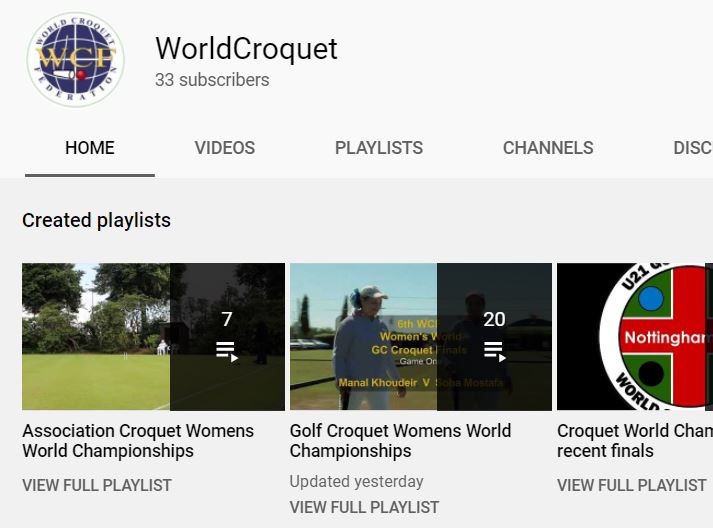 The re-building of the schedule following the one year postponement of events is taking shape and there are now confirmed dates for all the events in 2021 and 2022 – which we hope will stand the test of time!

All these arrangements are necessarily subject to the state of the pandemic and any restrictions placed on travel or overseas entry to the relevant countries.  The MC is keeping the situation under review and will make an announcement about each event approximately six months before it is due to be held.

Looking further ahead, the plans for events in 2023 and 2024 are available on our Upcoming Events page at http://worldcroquet.org/world-croquet-federation/upcoming-events/

Members will be consulted shortly with a revised plan for 2025-2030 accommodating a MacRobertson Shield in 2025.

The WCF Hall of Fame was relaunched in 2019 after a five year hiatus and the WCF MC exercised its right to elect one member per annum by inducting Bryan Dawson (AUS), the inventor and developer of the Dawson 2000 croquet ball.  Bryan was formally inducted during the opening ceremony of the 2020 Association Croquet World Championship which provided the players present with an opportunity to express their loud appreciation of his great contribution to the sport.

The WCF Hall of Fame Committee elected five new members in November 2020, all of whom have made a notable contribution to the game either as players, administrators or supporters.

Bob Alman (USA), a noted croquet organiser and populariser and the publisher of Croquet Online

Jose Alvarez-Sala (ESP), the founder and President of the Federación Española de Croquet

Jenny Clarke (NZL), one of the foremost women players of her generation

Salah Hassan (EGY), winner of the Golf Croquet World Championship in 1998 and 2000

Chris Hudson (ENG), the first Secretary-General of the WCF

This year, the WCF awarded its largest ever grant to the Latvian Croquet Federation to assist it in developing a new three-court club at Ikskile.  Work began in May with major groundworks including the installation of an underground automatic watering system with 10 high power sprinklers.  The courts were seeded by mid-July with a mixture of six different species of red fescue and has been growing well so far.  The first of the two clubhouses has just been finished.  The other clubhouse, which will have a large terrace for spectators, will be commissioned in January to be ready by April.

Regular play is expected to begin in May 2021.  The first international tournament will be the 10th holding of the traditional Baltic Open GC tournament.  This will take place as usual on the first weekend of September.

The WCF MC is delighted to announce the launch of the WCF YouTube channel.  It provides a great collection of croquet video footage and is available at https://www.youtube.com/channel/UCeyP1BjtSwyDF3A5n142ffw/

Several playlists have been created that showcase some of the best croquet footage from recent World Championships.  These include both Association Croquet and Golf Croquet and women’s and U21 events as well.  There are also some other top class videos from European or national events.

When you click on the videos in the playlists, you will be taken into the original contributors’ YouTube channel.  We hope you enjoy the collections and the WCF MC thanks the many excellent videographers who have taken the time to film these events over the years.

If you are aware of any footage that is missing and that you think should be included, please let us know.