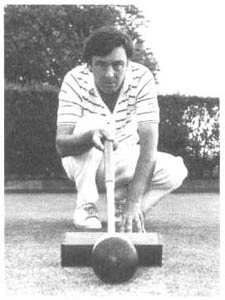 Nigel's rise to the top of the sport was nothing short of spectacular.  Studying as an undergraduate at Bristol University, he arrived as a new member at the local Bristol club in 1965 at the age of 19 or so and was immediately given a handicap of six.  He had, he later explained, played a bit at home from the age of 12 or so.  His father had bought a second-hand croquet set and the family had played on a former grass tennis court - despite two Victoria plum trees.  They made up their own rules.

In Bristol, he discovered the real game.  "I could," he says, "hit one ball on to another, at, say, 10 or 15 yards, and I think I had a basic idea of tactics.  But I was playing roll shots inaccurately, and I think I was still playing the sequence game."

A few weeks after arriving at Bristol his handicap was reduced to 3.  He had time before the end of the season for a weekend tournament at Cheltenham and a visit to Parkstone in September.  Next season, with a handicap of 1, he played in the Open Championship at the suggestion of a fellow club member, John Simon.  Together, they won the Open Doubles Championship.  Both were then selected for the President's Cup and Aspinall came joint second to William Ormerod.

Nigel had gone from his first tournament to selection for the President's Cup in just 10 months!  What is all the more remarkable is that there were no lessons on the way.  All he did was to ask a few questions.  As he said: "You pick it up like that, really."  Neither did he ever enjoy the luxury of fistfuls of bisques.

The record books show that, having risen to the top so effortlessly, he stayed there for over 20 years.  In that time, he won the Men's Championship twice, the Open Championship eight times and the President's Cup 11 times, a record that was equalled in 2012 (by Robert Fulford) but has yet to be surpassed.  He won the Open Championship three times in a row twice (1974 to 1976 and 1982 to 1984) and he won four President's Cups back to back (1973 to 1976).  He played in the MacRobertson Shield four times, from 1969 to 1986.  It is worth remembering that when he wasn't actually winning championships, he was usually the runner-up.

Prichard in his The History of Croquet described Nigel as a "practical, match-winning machine," and he was considered by some to be more or less unbeatable for some years.  "No," he says, "not quite unbeatable. No. There were all sorts of people who would occasionally beat me, and equally there were one or two people who found me - um - difficult."

"I think I had the ability to concentrate very well.  If you are concentrating 100%, it takes wild horses to drag you off your stride."  Another quality he had was self-belief.

However, the player who gains the greatest praise from Aspinall himself is John Solomon who, with himself, had a quality of "naturalness" of swing, shown often to perfection.

He believes in practising "a little", and he offers this advice on the subject: "Try to make it exciting.  For example, I have a routine of six-yard roquets, where you put four balls in a line and another four parallel six yards away, and the idea is that you hit as many consecutive shots as possible.  Say you hit three in a row and then miss.  You then have to zero your counter and start again.  But this time - say a week later - you have to improve on three.  As soon as you do, stop.  Don't let it become boring.  In other words, give yourself a target and improve on it."

Aspinall eventually gave up top-level play in 1995 when he learned he was diagnosed as having dangerously high blood pressure.  Commenting he said, " I reckoned it wasn't a good idea to increase the stress levels."

Nigel Aspinall was one of the supreme technicians of the game with his famed touch and control.  His incisiveness and fluency may have been "machine-like", but, unlike any machine, he sought to extend the notions of the possible.  To see Nigel in full flow in his hey-day, usually playing with a battered old mallet - one from his father's second-hand set, was to see croquet perfection.

Nigel is a modest man who claimed to only one significant contribution to the sport, namely that of introducing International Rules to the East Coast of the USA in 1974 on his first visit there.  However, those who saw him in action in the 1970s and 1980s do not accept such a limited account of his influence on the game.  He was the natural successor to John Solomon as the best player in the world and maintained that reputation until almost the dawn of the youthful revolution in English croquet in the late 1980s.