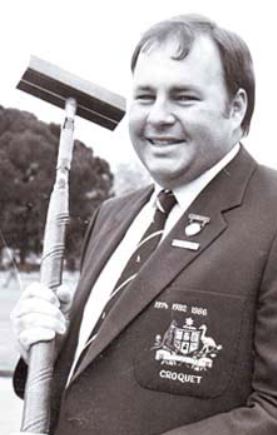 Neil Spooner became a household name in Australia after taking up croquet in 1970 and progressing through the ranks to reach the "A" grade in only nine months.  At his best he was one of the most formidable shots in the game.  Playing with an Irish style and from a firmly planted stance, he had one of the most powerful roquets in the game and often seemed to be unable to miss from any range.

Neil began playing Golf Croquet in 1968 while at Westminster School in Adelaide, South Australia. Tom and Jean Armstrong had introduced the game to Neil at the school and he quickly became their star pupil.

In 1987, Neil and his wife, Theresa, moved to California to take up a position as Director of Croquet at Sonoma-Cutrer Vineyards after being targeted by the President of the winery for that position.  His duties were to be responsible for the day to day running of the croquet activities and to organize a world class charity croquet tournament each year.  The Sonoma-Cutrer World Championship ran from 1986 to 2004 and was the first international singles event in croquet.

While in America, Neil introduced many people to croquet and coached.  He competed in several tournaments and among his successes were the Arizona Open in 1988 and 1989, the San Francisco Open in 1987, the Meadowood Classic, the Masters of Croquet, the California Open and several other events including the U S Open, which was an event organized by the American Croquet Association.  The ACA was a rival to the USCA and promoted Association Croquet (known as International Rules in the USA) while the USCA promoted the American version of croquet, known as “U.S. Rules”.

Neil became an extremely skilful exponent of U.S. Rules and became the first person to complete a triple peel in that code of the game which is much more difficult than in Association Croquet because of the restrictions on rushing a ball off the boundary.  He completed five U.S. Rules triple peels between 1988 and 1993.  He also became the first and so far only player to complete a three-ball triple peel in U.S. Rules tournament play, once at a Meadowood singles event and again in the Arizona Open.

During the San Francisco Open, Neil managed to defeat one opponent by a score of 26 to 1.  This is a rare feat in US Rules because all players start from a position three feet in front of hoop 1 and can normally expect to score at least two points!  Neil went on to achieve the even more impressive US Rules score line of 26 to 0 - a result referred to today as a "full Spooner" with the 26 - 1 score line being referred to as the "half Spooner".

A warm and engaging man with a well-developed sense of humour, Neil was always prepared to share his knowledge with anyone who cared to ask, irrespective of their level of ability.