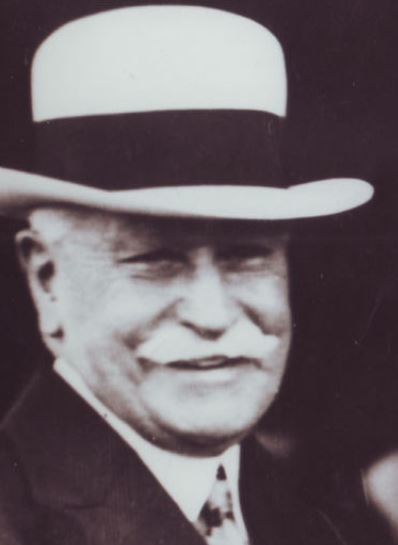 MacPherson Robertson was born in 1860 at Ballarat, Victoria.  His father, David, was a carpenter who had gone there attracted by the prospect of gold rush wealth.  When gold lost its steam, David persuaded his wife, Margaret, that they should move to Rockhampton in Queensland to build a new hospital as the main contractor.  However, with the money in his pocket, David departed for Fiji on a wild urge and left Margaret to return to Leith, Scotland, with four small children and one on the way.

It fell to MacPherson (“Mac”) to go out to work to support the family at the age of nine.  He rose at 3 a.m. to deliver newspapers over a ten-mile route and, by 6 a.m., he was lathering faces at a barber shop until 9 a.m.  He then attended school until 3 p.m. and went back to lathering faces until 9 p.m.  Unfortunately, even this prodigious work load did not bring in sufficient income and so Mac had to give up his education in order to work full-time.

A few years later, Mac’s father brought the family back to Australia.  Mac made up his mind to succeed in life and be able to be responsible for his entire family.  On arrival in Australia, he apprenticed himself to a confectioner in Fitzroy, Melbourne, and began a long journey which would see him become the most successful entrepreneur and highest taxpayer in Australia.

Aged 19, Mac set up a small factory in his mother’s bathroom with a “nail keg for a stove, a tin cup for a kettle and some sugar”.  His total capital was about two pounds (or about $200 in today’s money).  He made his confections on Mondays to Thursdays and sold them around Melbourne on Fridays and Saturdays.

Originally, his called his business the Mac Robertson Steam Confectionery Works.  By 1925, MacRobertson Chocolates employed 2,500 people.  Mac had built so many factories in Fitzroy that the block became known as “White City” because he had all his buildings painted white.

Although unions were trying hard to bring manufacturers under their thumb for exploiting workers, his factories never had a strike.  He often said that he should have liked to have done more for his workers but the union made it too difficult.  Nevertheless, he instituted an innovative pension scheme.  His annual turnover rose from £300 in 1880 to £2 million in 1925 ($200 million in today’s money).

He was not one to indulge himself with fine homes, yachts and beach houses, as other successful businessmen were prone to do.  Instead, he had an obsession with keeping fit both physically and mentally.  He punched a boxing speed ball each day to maintain his physical fitness and played croquet to gain relaxation from business concerns.  He enjoyed its strategy and believed that it reinforced his successful business psychology.

After the First World War, Mac saw the new entertainment of cinema as a new outlet for his lollies and chocolates.  He enlisted veteran servicemen to take up these concessions.  Most of the young veterans had no idea of running a business and some failed, owing Mac money for his stock.  He realised that he would have to train them and his other concessionaires in business management.  He realised the benefits of a thinking sport like croquet and encouraged them all to take it up and play it whenever they were free.  Croquet proved to be a wonderful teaching aid for training these young men m in self-discipline and risk management and other attributes conducive to business success.

In 1925, wishing to do something spectacular to create more media interest in his products and to encourage his newly-recruited croquet players, Mac established and sponsored the MacRobertson Shield between Australia and England.  The “Mac”, as the Shield is popularly and appropriately known among croquet players all over the world, remains the most iconic, historic and significant competitive croquet event in the international calendar.  New Zealand joined the competition in 1930 and the United States of America in 1993.  It is the Ryder Cup of Association Croquet and selection to represent one’s country in the Mac remains the pinnacle of a croquet career.

In 1927, Mac co-founded MacRobertson-Miller Aviation Co. and sponsored an around Australia Expedition by two motor lorries in 1928.  Then, in the early 1930s, Mac sponsored a British, Australian and New Zealand Antarctic Research Expedition under the leadership of Douglas Mawson.  This gave Australia a physical presence on the Antarctic mainland and, in recognition of his patronage, Mawson named a large tract of the continent as MacRobertson Land.  Mac was awarded a Fellowship of the Royal Geographic Society in 1931, was knighted in 1932 and appointed K.B.E. in 1935.

Despite the onset of the Great Depression in the 1930s, Mac was able to buck the trend and hire even more employees because his “Old Gold” Chocolate Box and Columbines were so well sponsored and advertised.  Mac was an active and generous supporter of charities and unemployment relief but was often disappointed at the wretchedness and demands of some of the poor together with the stupidity and avarice of federal politicians.

This experience led Mac to re-evaluate his charitable actions and financial support to the individual poor.  He concluded that his generosity often simply encouraged others to ask for a free handout as well and that some of the poor were idle and demanding while despising and abusing the prosperous and hard working.  He decided to cease making indiscriminate donations to the individuals and instead concentrate on projects that created wealth for the nation.

In 1933, he donated £100,000 to Victoria for its centenary celebrations.  He was asked what he thought should be done with the money and suggested building a Girls High School; a much-needed bridge over the Yarra River at Grange Road; a fountain in front of the Shrine of Remembrance on St. Kilda Road and an Herbarium in the Melbourne Botanical Gardens.  His point was that these building projects would help to provide employment.

In addition, with part of his donation, he decided to advertise Australia and Melbourne by organising and sponsoring the great London to Melbourne Centenary Air Race.  This was then the most gallant and gruelling air race of all time and bought Australia unprecedented publicity.  The top aviators of the world competed and the publicity and status of the event assured the future participation of Australia in international commercial aviation.

However, the federal government responded to this generosity by demanding £42,000 of the £100,000 as tax.  At the time Mac was the highest taxpayer in Australia and one of the biggest employers.  Nonetheless, Mac decided to pay the tax and investigate this extraordinary example of inequity and by bringing it before the highest court in the land.  As a consequence of his action, donations to prescribed charities became tax deductible.

He was one of the greatest entrepreneurs and philanthropists in Australian history and his contribution to international croquet will never be forgotten.