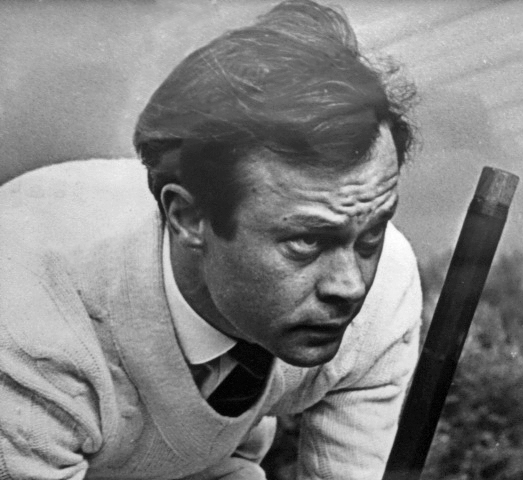 John Solomon was born in Wandsworth, South London and emerged onto the tournament croquet scene in 1948 when Croquet could be said to be hanging by a thread.  Affected by the social changes brought about by the war, the restrictions of rationing and the loss of many clubs and about half of the Croquet Association’s membership, it seemed to be a game almost exclusively for old people and doomed to fizzle out in the next decade or so.  Fortunately for Croquet, John appeared and, aided by youth and exceptional ability, did much to keep the flame alive for the next fifteen years.

John made such rapid progress in his first two seasons and gave such a clear indication of his potential that, when a vacancy arose, the selectors were inspired to ask him to join the England team for the 1950/51 Test series in New Zealand.  This was despite the fact that he was only 18 at the time and had never played in a championship or won a major event.  However, the decision proved to be a resounding success and John not only played extremely well in the Test Matches but won the New Zealand Open Championship and Doubles Championship for good measure.

John also represented England or Great Britain in the MacRobertson Shield on five occasions from 1950 to 1974.  However, it is not for just for his many successes that croquet players should be indebted to him.  Instead, what mattered more was the manner in which he achieved his success and how he was willing to use the legendary status that his success brought him to promote Croquet.

Top sportsmen in any discipline are frequently idiosyncratic.  Not all play their sport in a way that catches the eye and persuades the casual onlooker to stay and watch.  John Solomon’s special talent was to make croquet look easy, rhythmic and elegant.  He was really good to watch and it was clear that some came to the major events to watch John Solomon play croquet rather than to watch croquet as such.  When the media could be persuaded to take an interest in croquet and see John in action, they could not fail to be impressed by the sheer quality of the man and his performance.  Croquet might not be able to avoid the impression that it was a game suitable for the elderly but, with John Solomon on court, it was obvious that it was also a game of great skill and precision and one for all ages.  He was not content just to reel off the wins.  He particularly enjoyed pushing the boundaries by trying new openings and tactics.  Some of his feats still reverberate today – the three-ball triple against Cotter in 1964, the jump over rover to hit the peg and beat Aspinall in 1969 and, perhaps most remarkable of all, his single-handed win in the 1972 Open Doubles Championship where he peeled the absent Cotter’s ball through all 12 hoops – twice.

John Prince, another croquet legend who met John in New Zealand in 1963, said that the Solomon effect was to give the spectator the impression that they were watching a virtuoso playing a favourite piece of music and that John was to croquet what Roger Federer is to tennis.  The resemblance to Federer is particularly apt in another important aspect of competition – demeanour on court and sportsmanship.  In play, John never lost his self-control, let alone his temper, and always treated the twin impostors of defeat and victory just the same.  Like Dudley Hamilton-Miller, a slight pursing of the lips or, in extremis, half-raising an eyebrow would be the only visible reaction to some misfortune.  It was tellingly said of John that if you observed him walking off the court with his opponent you would have no inkling of the result.  He was simply the consummate sportsman.

English croquet has always been fortunate that its best players generally feel an obligation to put something back into the game.  John was no exception and threw himself into croquet administration and promotion.  He became Chairman of Council at the age of 30 and, later in life, served as President of the Croquet Association for 22 years from 1982 to 2004.  His legendary status drew many invitations from outside the UK and his visits to croquet clubs in the Channel Islands, France, Ireland, Italy, South Africa, Switzerland and the USA were greatly appreciated and played an important part in encouraging the game and sometimes in assisting the birth of organised croquet.

In particular, he led the Hurlingham team that travelled to the USA in 1967 to play the Westhampton Mallet Club.  He met the late Jack Osborn, the founder of the US Croquet Association, and Jack expressly acknowledged the impact of John’s strong advice that the most important first step in establishing a national croquet body was to develop a single, agreed set of rules.

From that flowed the formation of the USCA in 1981, the involvement of American players in international croquet, the first Test between the USA and Great Britain at Nottingham in 1985, the establishment in 1988 of the Solomon Trophy for annual competition between Great Britain and the USA and the admission of the USA to the MacRobertson Shield in 1993.  As the senior international croquet statesman, John made a truly great contribution which fully complemented his illustrious playing career.

His legacy is a game established in almost 30 countries throughout the world and a succession of champions who have followed in John’s footsteps over the last 50 years.  Nigel Aspinall, Keith Wylie, Robert Fulford, Reg Bamford and Robert Fletcher are the names that spring immediately to mind.  But it is very uncertain what the present position would have been and whether any of them would have become players and champions had the young John Solomon not taken up the game almost 70 years ago and played it so expertly and beautifully.