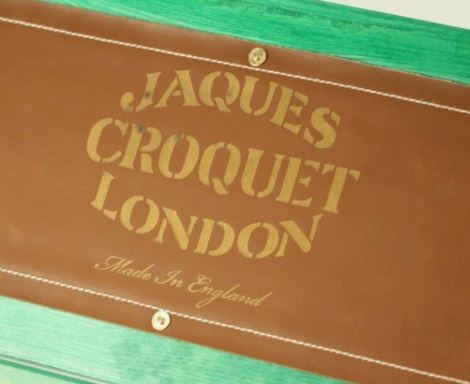 John Jaques II was the grandson of Thomas Jaques who founded a company in 1795 that can claim to be the oldest manufacturer of games in the world.  Thomas was a farmer’s son of French Huguenot descent whose recent forebears had found refuge in England sometime after 1685 when the Edict of Nantes forbade Protestantism in France.

Thomas’ son John went into partnership with him and so began a long family tradition which survives to today.  Originally, the firm described itself as a “Manufacturer of Ivory, Hardwoods, Bone, and Tunbridge Ware” but John’s son, John Jaques II, built a reputation for Jaques & Son as a publisher of games.

John Jaques II enjoyed considerable success in promoting croquet and it speedily became the vogue, not only in England but also in Europe and throughout the British Empire.  Croquet became especially popular in India, reportedly played by The Viceroy himself with a solid ivory mallet, which was probably made by Jaques as part of their finest set of croquet equipment.

The attractions of croquet were obvious with the benefit of hindsight.  It allowed fashionable people to step outside the claustrophobic Victorian parlour and "take exercise" and enjoy the fresh air without any risk of breaking into a sweat.  It provided an opportunity to show off their finery which is probably why the term "crinoline croquet" entered the lexicon.  It also provided young men and women a legitimate reason for mingling and sometimes wandering off into the proverbial rhododendron bushes, momentarily out of sight of the ever-present chaperones!

"Nothing but tobacco smoke has ever spread as rapidly" commented Dr. Prior, an early enthusiast of the game.  Certainly, Jaques and Son, as the modern firm of Jaques of London was then called, had no trouble selling large quantities of croquet equipment.  By the early 1860s, John Jaques II was regarded as the greatest authority on the game and, in 1864, wrote and published Croquet; the Laws and Regulations of the Game which is recognizably the foundation of the modern laws of Association Croquet.