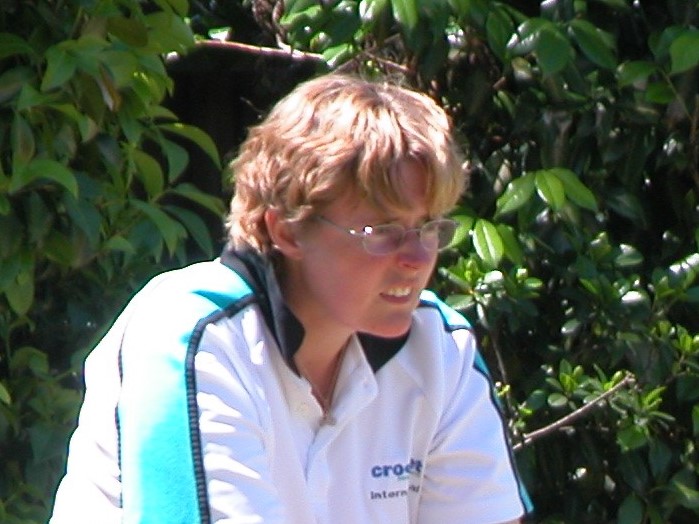 Jenny Clarke (New Zealand) began playing croquet whilst studying for her PhD in the UK at Oxford University in the 1990’s, becoming a regular player on the UK tournament circuit the following decade and becoming an accomplished A-Class player. She returned home to Christchurch in her native New Zealand, where she still lives with her husband Chris Clarke who she married in 2008. She is a life member of the Canterbury Croquet Association and the United Croquet Club.

Jenny plays both AC and GC and won the Women’s AC World Championship in 2012.  The GC title has always eluded her but she has two silver and three bronze medals in this event. She has been a member of the New Zealand AC and GC Test Teams for many years.  In addition to various Trans Tasman matches, she has made three appearances in the MacRobertson Shield including the victorious 2014 team and as captain of the 2017 team. She was also a member of the victorious Openshaw Shield team of 2016, only she and her husband have won both the AC and GC World Team Championships.

Jenny has won various open and women’s domestic titles both in NZ and the UK but her stand-out titles at this level are her three Australian Open Singles titles in 2010, 2018 and 2019.

Whilst it is her playing success which is particularly noteworthy, Jenny, who is a lecturer in Sport Science at Canterbury University, is also an accomplished coach. She coaches both AC and GC at an international level, has developed a coaching website and introduced the athlete-centred coaching methodology to croquet. She has also spent a good deal of time honing her own skills including changing from playing right to left handed in the midst of her career.

In addition to the many titles she has won, Jenny has regularly been the number 1 ranked female player at both AC and GC throughout the past 15 years and has also achieved the highest AC grade of any woman since the rankings began. Jenny is without doubt the outstanding female croquet player of her generation.