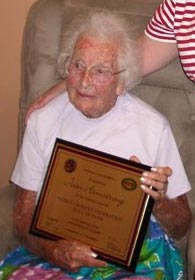 Jean made a very substantial contribution to croquet over a very long period of time.  Her principal strength was to get new players to begin playing and then to continue to play the game.  She was tenacious and players came under her spell and became determined to do well guided by her expert tuition.  Although a stroke in her nineties meant that she could no longer play or coach, she remained a fount of knowledge of the game until the end of her life.

Jean had an enviable record of success stories with the people she coached.  Altogether, twelve people who had their first game with her went on to become State players.  She and husband Tom spent two years of their lives teaching croquet in colleges and Centres of Adult Education hoping to develop players that would be able to beat England in the MacRobertson Shield.  However, only two first class players emerged in the shape of Neil Spooner and Robert Bartholomaeus.

Between 1969 and 1971, Jean taught croquet five days a week in six colleges.  Saturday matches were organised and the mothers liked this because the croquet court became a social meeting place.  Competitions were arranged at the South Australian Croquet Association Headquarters with as many as 48 turning out on a Saturday morning.

Although Jean worked very hard in schools and colleges, she found that it was not a great source of croquet players.  It seemed that the younger a player starts croquet, the earlier they leave the game!  Possibly one reason was that the girls found the clothing restrictions irksome.  One girl was criticized because she went without a hat!

Recruiting new club members was the area where Jean had an amazing record and it is believed that there were about 300 who became registered croquet players through her efforts.  In Jean’s words, “I think the main thing is that once we’ve got them, we haven’t lost them!”

Marion Croquet Club was one of Jean’s crowning glories in recruiting.  The five lawns were first used in February 1983.  Within about nine months, there was a membership of forty, almost thirty of them new to croquet.  At its peak Marion had over 100 members.  First new members were a trickle and then became a flood.  It proved that new players are the best recruiters.  Jean’s first strategic aim was to make the new players enthusiastic.  She did this by playing Golf Croquet until they were hooked and then devoted time to making them knowledgeable in the game.

She had another recruitment triumph in Rockhampton.  She stayed there for six weeks and recruited twelve fully paid-up members who had never thought of playing croquet.  The Club President arranged for her to be interviewed on TV and this certainly helped – as four of the recruits were from the TV station!

Jean had more success at Barmera which was also started from nothing.  The courts were laid, croquet gear was lent to them and soon there were twenty-seven players.

For many years, Jean liaised with what was then known as the National Fitness Council (now Recreation and Sport).  She participated in their Recreation for Housewives Scheme, mostly in the city of Brisbane but, on one occasion, a three-day visit to Barmera was arranged.  There a most enthusiastic group was coached on the Oval and, when the irrigation programme drove them off, Jean persuaded a nearby hotel to lend a piece of ground where a two court complex was laid out.

Jean Armstrong is one of those rare individuals who combined the development of excellence in sport combined with the encouragement of the ‘also rans'.  She did not discriminate between a potential state or international player and a person who had difficulty in walking.  She simply loved Croquet and her enthusiasm was infectious and enduring.