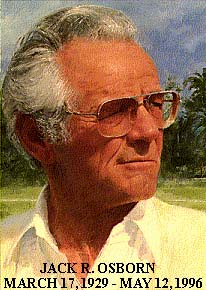 Jack was the founder and inaugural President of the United States Croquet Association.  Having founded the USCA in 1977, he stated that his ambition was to be able to go from city to city in every week of the year and play croquet.   He lived to see the USCA grow to have 3,500 individual members and over 80 sanctioned tournaments played annually around America.

When the USCA was founded, the croquet most Americans were familiar with was the nine-wicket, short mallet, two-stake game which had been popularised in the 19th century and played in millions of backyards since.  Jack’s first mission was to convince the American public of the merits of the USCA six wicket game played on a closely-mown court with the same substantial cast iron hoops and heavy balls and mallets used in tournament croquet in other croquet-playing countries.  Initially, he was convinced that this was the only game to promote in America but later he came to recognise the merits of the more aggressive and dynamic “International Rules” game, as Association Croquet is usually called in the USA, and was delighted to see the USA admitted to the historic MacRobertson Shield competition in 1993 where it meets teams from Australia, England and New Zealand every four years.

Jack was an excellent and tireless ambassador and for the sport of Croquet, both in the United States and overseas.  As USCA President, he implemented the advice of John Solomon, the doyen of English croquet, that the first essential step for a new national croquet association was to agree a single set of rules.  He also co-wrote two books on the game, including From Backyard to Greensward.

In a speech not long before his death, Mr. Osborn said:

"The game of croquet, to which I have given such a large portion of my life, fuses so many different elements: competition, a fine eye, a sharp mind, a firm stroke, a large amount of patience, ability to plan ahead and, by no means the least, a control of one's temper.  Few of us have had all these qualities in hand in every game.  But they are there to strive for in all games.  Yet beyond all of these, our game provides that finest of outcomes: comradeship.  It is that which brings us together.  And it is that which I have always enjoyed, wicket by wicket."