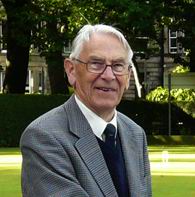 Ian Howard Wright was one of Scotland's top players at his peak and the most influential of the pioneers that helped the formation of the Scottish Croquet Association in 1974.

As croquet in Scotland expanded after the CA Centenary in 1967, Ian was one of the prime movers in the setting-up of the Scottish Croquet Committee as part of the Croquet Association.  This organised competitive croquet in Scotland, from whose numbers came the next three winners of the All-England Handicap, and included setting up the Edinburgh Week Tournament in 1969, which has been run annually during the Edinburgh Festival since 1972.

When it became apparent that the Scottish Sports Council (now sportScotland) would support sports only with autonomous National Governing Bodies, Ian used his contacts and influence in the CA to initiate the amicable secession of the Scottish Croquet Committee and its rebirth as the independent Scottish Croquet Association.  He was also a key figure in getting the 1974 New Zealand MacRobertson Shield team to play a warm-up match against Scotland, an event which further stimulated Scottish competitive croquet.  While Ian did not do all of this alone, he has continued to be involved with Scottish croquet for 45 years and, particularly in the East of Scotland, he has been known as the "Father of Scottish Croquet".