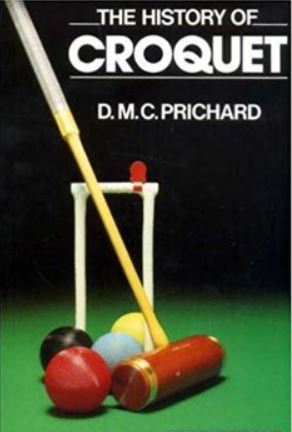 David Matthew Caradoc Prichard was born and brought up in Glamorgan on the Prichard family estate.  He was educated at Wellington College, where he played in the 1st XI cricket for two years as a spin bowler, and at the Royal Military College, Sandhurst.  He was then commissioned into The Royal Welch Fusiliers, in which he served for 25 years in various parts of the British Empire and throughout the Second World War.  He was only the second officer ever to pass both Staff College and Technical Staff College.  He played cricket for the Army and enjoyed polo, hunting and riding in point-to-points.

When David was invalided out of the Army, he moved to Monmouthshire.  He soon discovered croquet and was immediately bitten.  He joined Cheltenham and built his own lawn at his home at Gobion Manor near Abergavenny.  His rise to the A-Class was rapid, winning the D, C, B and A classes in consecutive years at the annual Cheltenham Tournament.  In 1960, he was the first winner of the Apps Bowl, then for the most improved player, and also won his CA Silver Medal.  In 1961, he was selected for the Surrey Cup which he promptly won.  He played in this selection event nine times, winning a record three times, and also played in the Chairman's Salver three times.  He was the runner-up in 1962 Men's Championship to John Solomon and was on the fringe of selection for the 1963 MacRobertson Shield team.

Often accompanied by his wife, Betty, David played widely on the tournament circuit at Budleigh Salterton, Cheltenham, Devonshire Park, Hunstanton, Hurlingham, Nottingham, Roehampton and Southwick.  He played in both the Open Championship and the Men's Championships on about a dozen occasions.  He won many A-Class events, handicap singles and doubles and mixed and open doubles in his career and reached a handicap of -2.5.  This was all achieved despite suffering from a rigid neck caused by spondylitis.  As one of the most experienced referees, he never allowed his condition to interfere with his duties and thought nothing of lying down on his back to judge a wiring decision between his toes!

David undoubtedly put far more back into croquet than he took out through his administrative and other work for the Croquet Association where his orderly mind and wide knowledge proved extremely useful.  He served on the CA Council for over 20 years and as its Chairman from 1968-70.  During that time, he served on the Laws Committee and was its chairman for eight years in two separate terms.  He was also a selector for many years and Chairman of Selectors.  He was chairman of the CA Special Appeals Committee which, unusually, had to meet for three different special appeals during his term.  He was elected a Vice-President of the Croquet Association in 1982.

As chairman of the Laws Committee, David was responsible for the 1972 rewrite of the Laws.  This took months of meetings and copious proof reading and amending.  He introduced the idea of a Commentary on the Laws and wrote four editions of this work. Not content with this, he also rewrote the CA Council rules for conducting meetings and compiled a summary of all important CA Council decisions back to its formation in 1897.

David wrote many technical, legal and administrative articles for the Croquet Gazette, the house magazine of the Croquet Association. However, his final and arguably greatest contribution to croquet was the writing and publication of The History of Croquet in 1981.  This took a couple of years to research and write, entailing many trips to the British Library in Colindale and supported by the erudite assistance of Betty.  It is a very readable account and remains widely accepted as the definitive history of the game in England.  All the proceeds of the sale of the book were donated to the CA.

Not the least of his contributions to croquet came in the form of four A-Class players that he introduced to the game - namely Betty and his three sons!

David Prichard always stood up for the rights of the individual and hated any sort of undercover plot.  As a backbench member of Council, he discovered and nipped in the bud certain underhand or unwise dealings on more than one occasion.  He carefully researched his arguments on most issues and was an unswerving campaigner to maintain Croquet as an amateur sport.  He abhorred any possible misuse or waste of CA funds but gave freely of his time and effort to the CA throughout his time on the croquet scene.

Although David could appear to be a little intimidating, partly due to his stooped posture from spondylitis and because of a certain gruffness of manner, he had an excellent sense of humour.  Shortly before his death, the Council had decided to allow croquet players to win up to £2,000 per annum in prize money without losing their amateur status.  Despite his well-known opposition to this change, he cheerfully informed another arch-proponent of amateurism at the Cheltenham Club that he had decided to turn professional!