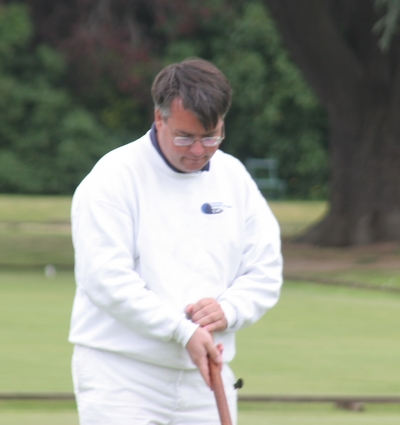 Chris Clarke discovered croquet as a teenager at Queen Elizabeth’s Grammar School, Blackburn.  He rose rapidly to the top of the sport and has won every major event in Association Croquet and several in Golf Croquet.  However, this is only a small part of his overall contribution to the game as he has served in many coaching and administrative positions over the past 30 years.  He moved to live in New Zealand in 2005.

His other individual achievements include the first sextuple peel in the Association Croquet World Championship in 1991 and the first delayed sextuple peel in the same event in 1995.  At 17, he was the youngest ever winner of the President’s Cup in 1988 and, at 24, became the youngest ever Great Britain captain in 1996.  In 2007, he completed 20 consecutive triple peels in tournament play.  Chris has appeared in a total of six winning MacRobertson Shield teams – five for Great Britain (1993, 1996, 2000, 2003 and 2006) and one for New Zealand (2014).  He was selected for Great Britain in 2010 but could not play because of health problems.  He was placed first in the Association Croquet world rankings from early 2008 to 2010.

Chris has made a significant contribution to croquet as an administrator.  He served on the CA Council in the early nineties and on the Colchester Club committee for several years.  After moving to New Zealand, he served on the Canterbury Croquet Association committee, first as Tournament Convenor and then as President.  He also served on the CNZ Handicap Review Committee and, for part of 2010, as WCF Secretary-General.  He chaired the Organising Committee for the 2008 Association Croquet World Championship in Christchurch, New Zealand which was seen as one of the best World Championships from a playing perspective and also generated a profit of $25,000 for the benefit of Canterbury clubs.  As a member of the United Club in Christchurch, he was involved in the bid to obtain a new clubhouse and a seventh lawn and also served as the groundsman for several years.  In 2009, he organised a trip to Europe for some NZ Juniors and managed the players in the first Under 21 Golf Croquet World Championship in Egypt.  He has been elected a Life Member of the United Croquet Club and the Canterbury Croquet Association in recognition of his contributions to the sport.

His contribution as a coach has been just as impressive.  For two seasons in the nineties, he coached the Great Britain Under-21 Squad which included Jamie Burch, Kristian Chambers and James Death.  Burch and Death are now MacRobertson Shield players.  Between 2000 and 2005, Chris gave several Gold plus level coaching courses which were recognised as the most detailed and best presented courses that many of the players had ever attended.  Since moving to New Zealand, he has served as the coach of the Under-21 Squad and run coaching courses of the NZ Development Squad in the North Island and several courses for all levels of AC and GC players in Canterbury and Timaru.