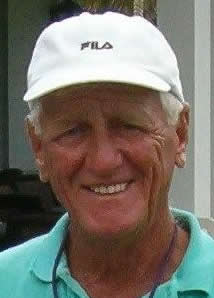 John Archibald McNeil (“Archie”) Peck was an all-round American sportsman who took up croquet in the 1960s and remained devoted to the game for the rest of his life.  Blessed with film-star good looks and a relaxed and affable personality, he became the “glamour boy” of the United States Croquet Association as its founder, Jack Osborn, successfully attracted the East Coast jet set to the charms of the game.  Archie was a natural athlete who played croquet with style, grace and skill and did much to put croquet on the map in America in the 1970s and 1980s.

Archie, who also played tennis and golf among other sports, was the USCA’s leading player for several years.  He won the USCA National Singles Championships in 1977, 1979, 1980 and 1982 and the National Doubles Championships in 1977 and 1979.  He was also the Southern Regional singles champion in 1982, 1983 and 1984, the year he was inducted into the USCA Hall of Fame.

After a successful career in West Palm Beach real estate, Archie decided to devote what most people would regard as their retirement years to ensuring that the newly-built 12 lawn National Croquet Center in Florida Mango Drive in West Palm Beach would be a success.  He was appointed Director of Croquet in 2001 at the age of 66 and thereafter gave what seemed to be 100 per cent of his time, talent and energy to ensure the success of the Center and promote the enjoyment of croquet.

He was usually to be found at the Center day and night either working on the lawns or being available to teach, help and encourage other players and newcomers.  He had a gift for understanding how to inspire players and correct their weaknesses with great encouragement.  He made the game fun and always encouraged good sportsmanship.