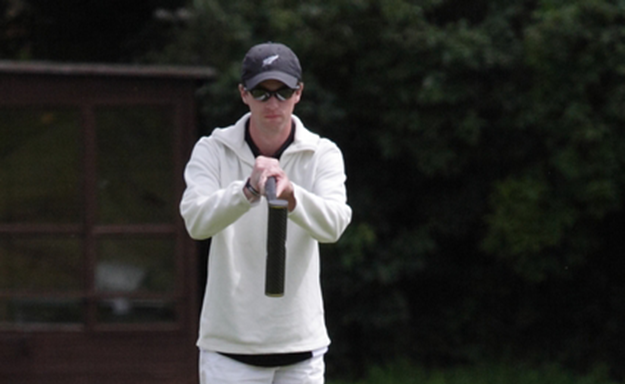 Bamford attempted a sextuple in game 1 which came to grief when an unkind slope caused a gentle roquet to miss.  This cost him the opening game but excellent shooting and routine triple peels gave him the next two games.  He again took an early innings in game 4 and reached 4-back with a Diagonal Spread Leave and the most likely outcome seemed yet another 3-1 win for Reg after dropping the first game, the pattern of both his quarter-final and semi-final victories.

Chapman had missed lift shots from A-baulk in games 2 and 3 but now switched to shooting at the ball by the peg from the end of A-baulk.  He hit and went to 4-back with two POPs and a New Standard Leave which placed Reg's backward ball near hoop 2.  Bamford just missed the 20 yard lift shot with that ball from B-baulk into corner 4.  This gave Chapman a good starting position for a standard triple peel and he completed it confidently to square the match.

Game 5 followed similar lines to game 4 with Bamford reaching 4-back with a Diagional Spread Leave and Chapman again choosing to shoot at the peg ball from the end of A-baulk.  Again he hit and went to 4-back with another New Standard Leave with Reg's hoop 1 ball again near hoop 2.   Bamford did not shirk the challenge and again lifted his backward ball to B-baulk to take the 20 yard shot that, if he hit, would give him an excellent chance for his own triple peel to win the game, match and title - and the achievement of once again holding both the Golf Croquet and Association Croquet world championships simultaneously, the feat he had achieved in April 2013.

Bamford took great care in preparing for the shot but, once again, it missed by a tiny margin on the right and Chapman, a previous finalist in 2013 and semi-finalist in 2016, was presented with the chance to complete his third triple peel of the final and become World Champion.  The break was not without a couple of moments of concern but Paddy coped calmly with the challenges, completed a straight rover peel and pegged out to great acclaim from the watching crowd.

The Shield was won by Greg Fletcher (Australia), the Bowl by Jonathan Powe (England) and the Plate by Stephen Morgan (USA)