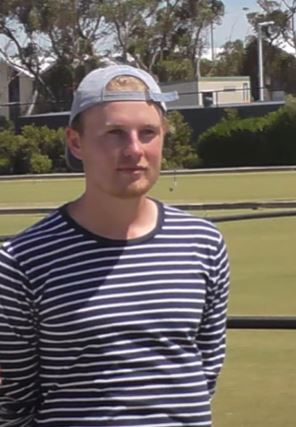 Josh Freeth (New Zealand) defeated Egypt's Marwan El Sabarouti by the very narrow margin of 5-7, 7-6, 7-6 to win the 2015 Under-21 Golf Croquet World Championship at the United Club in Christchurch, New Zealand.  Josh thereby repeated the feat of his countryman, Duncan Dixon, who won the first Under-21 GCWC in Cairo in 2005 and deserves the warmest congratulations on his achievement.

A field of 28 featured four Egyptians, two Australians and two English competitors, including the top seed, Harry Dodge.  After three days of block play, the field was reduced to 16 for the knock-out stage.  The semi-finals pitched Dodge against El Sabarouti and Freeth against another New Zealander, Felix Webby.

Dodge had beaten El Sabarouti in a very close block match but the Egyptian now gained his revenge 4-7, 7-4, 7-4.  Freeth, who displayed great powers of concentration in dealing with the fast and challenging conditions and solid Atkins hoops, had a more straighforward 7-3, 7-5 win over Webby.

Full results are available at https://croquetscores.com/2015/gc/wcf-u21-world-championships-1