(a)     In doubles play, players may advise their partners and assist in the playing of a stroke by indicating the direction in which the mallet should be swung.  However, when the stroke is actually played, the partner is to stand well clear of the striker or any position which might assist the striker in gauging the strength or direction of the stroke.

(b)     If asked, a player is to tell an opponent the score, which hoop is next in order, which ball was played last, or how any ball over the halfway line reached its position.

(c)      If a player acts on incorrect information given by the opponent and it is discovered before the player plays the same ball again, the player shall have the choice of a replay or allowing the play to stand, including any points scored in order.

(d)     A player may not give tactical advice to the opposing side.  If such advice is given then Rule 14(a)(2) applies.  Players on the opposing side may choose to act on the advice or to ignore it.

(e)      While advice, other than encouragement, should not be given from off the court, a player is entitled to act on such advice.

Commentary on Rule 8(e):  Management, rather than players and referees should seek to prevent off-court advice.  Local Rules, with management permission may allow advice from off the court.

(a)     Loose impediments on the court may be removed.  Examples include worm casts, twigs, leaves, nuts, refuse and similar material.

(b)     The striker is entitled to relief from damage on the court, which is not a normal feature of that particular court nor is a consequence of ball damage, if in the opinion of both players or of a referee it affects play.  The damage is to be repaired if possible.  If this is impractical the balls may be moved so as to give the striker no advantage.  A ball so moved but not affected by the stroke is to be replaced after the turn has ended.

Commentary on Rule 9(b):  Holes that result from patchy grass cover should be thought of as normal features, whereas holes formed by weed repair or mallet damage are not normal features.  Holes or runs in the lawn caused by repeated ball movement, particularly in hoops should be treated as normal features of an indifferent court.  A sprinkler head hole is an outside agency.

(c)      Where a fixed obstacle outside the court interferes with a striker’s swing or where the ground levels outside the boundary prevent the striker from adopting a level stance, the striker, with the consent of the opponent or referee, may move the ball to a point on the line connecting the point where the ball lies and the striker’s intended target.  The ball may be moved only the minimum distance to avoid the obstruction or uneven ground.  If other balls lie within a yard (914 mm) of the original position of the striker’s ball and are likely to interfere with the passage of the striker’s ball, they are to be moved an equal distance into the court, parallel to the line of play, before the stroke is played, so that their relative positions remain the same.  If such balls are not disturbed by the stroke, they are to be replaced after the turn has ended.

Commentary on Rule 9(c):  Where a boundary is close to a fence line or similar obstruction it is acceptable to move the boundary and corner hoops towards the centre line by 18 inches or more if that will make room for players to swing unimpeded.

(d)     An outside agency is any agency unconnected with the game.  Examples include animals, spectators, a referee other than the players, the players or equipment from another game, accessories, a ball off the court or a ball directed to be played from a penalty spot and other stray objects.  Neither loose impediments nor weather are outside agencies.

(e)      If an outside agency or weather moves a stationary ball, it is to be replaced before the next stroke.

(g)     If an outside agency, other than a scoring clip attached to a hoop, is in place before a stroke is played, and the outside agency is hit by a moving ball, then Rule 9(f) does not apply.  The opponent has the choice of leaving the moving ball where it stopped or of placing it where the opponent felt it would have stopped if there had been no interference. In particular no replay is permitted.

(h)     When attempting to run a hoop if the ball makes contact with a scoring clip that is attached to the hoop the ball remains where it comes to rest, there is no replay and no hoop point is scored.

(i)      After suffering interference a moving ball may not cause a stationary ball to move. Any ball so moved is to be replaced.

(j)      A player may lift a ball, with or without permission, in order to prevent it being struck by an outside agency.

(k)     No point may be scored for any ball through interference. 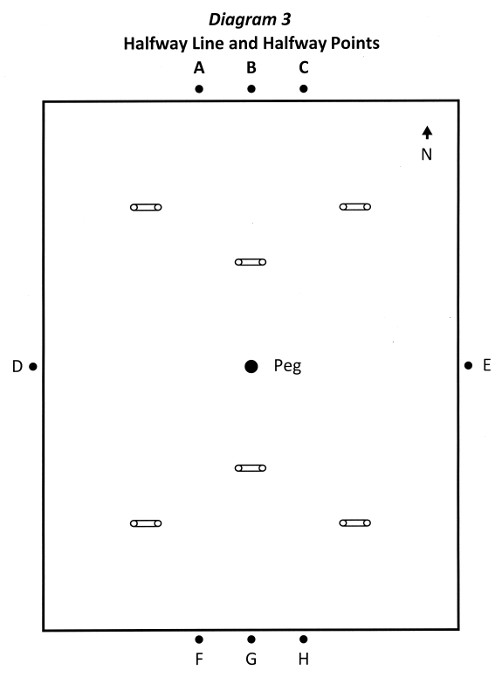