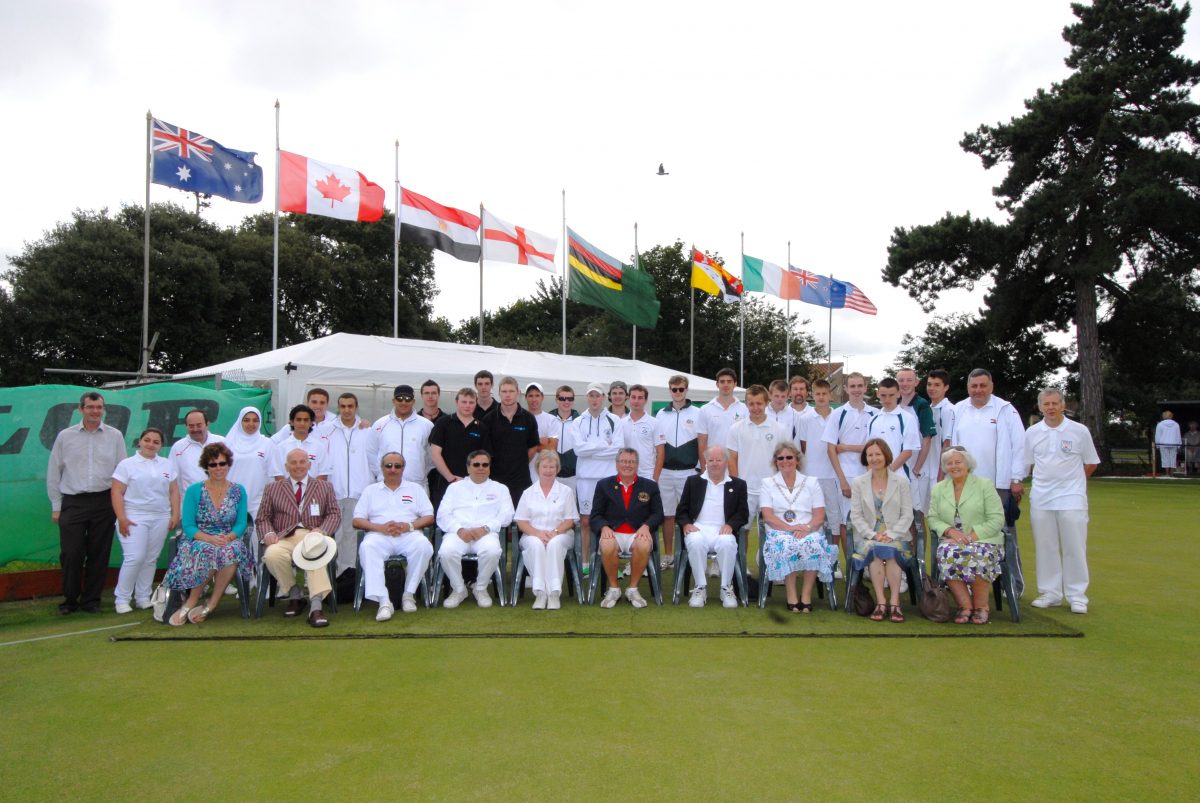 As part of their Centenary year celebrations Hunstanton played host to the 2nd WCF U21 World Championship, seven countries were represented Australia, Canada, Egypt, England, Ireland, New Zealand and the United States.  At a well attended Opening Ceremony the event was declared open by the Mayor of Hunstanton, Carol Bower.  Throughout the week the temperature was cold for the time of year and it was periodically quite windy but this at least meant that the flags flew well throughout the event.  The flags were one of the many transformations which the club had made for the event, which also included a marquee for spectators, improved safety netting to protect them and windbreaks on the perimeter fence to try to provide some protection from the wind.  Additionally there was a colour programme produced and players and officials were provided with a variety of mementos of the event, all of which was only possible due to the hard work of the club volunteers, it seemed as though every member of the club was involved somewhere along the line and this may indeed have been the case.

The twenty four players were divided into four all play all blocks of six playing nineteen point games over the first two days.  Three players won all their block games, Will Gee (England), Miss Sahar Ezz (Egypt) and Ryan Cabble (England) following a tie break Hamish McIntosh (New Zealand) won the other block.  All six Egyptians progressed to the knock out phase although Miss Pauline Salib required a play-off to sneak through in fourth place in her block.  Local member Tim Race managed to claim the last place in the KO also with a play-off victory over Jack Gleeson.  Several players stood out, Moustafa Nezar, Will Gee and in particular Hamish McIntosh seemed to be playing well, previous finalist Hesham Shaker didnt seem to be on top of his game.

The knock-out draw unfortunately pitted all six Egyptians against each other.  In the contest between the only two female players in the event Miss Pauline Salib prevailed over Miss Sahar Ezz.  Sahar's brother Saher lost to Ihab Elibiary and Moustafa Nezar beat Hesham Shaker in the match of the round 7-6, 7-6.  Hamish knocked out local boy Tim overwhelming him in the second game after Tim had managed to hang on well in game one before eventually succumbing.  The other four quarter final places were taken by Will Gee, Kieran Murphy (Ireland), Ryan Cabble and Noel Reynolds who won the all Australian last 16 battle against Roy Smith.  Live scoring on the internet was attracting viewers from all over the world with Noel's mother maybe being the most dedicated viewer.

In the quarters Will was far too strong for Kieran and Pauline always looked the likely winner against Noel, although she was taken to three games.  Moustafa was clearly establishing himself as the favourite after his good win over Hesham and he reinforced this with a comprehensive and controlled victory over Hamish.  Ryan Cabble would have been most people's pick to beat Ihab Eliebiary the weakest remaining Egyptian but failing to win game one which he had control over even in the final stages cost him dearly as he eventually went down 2-1.

The semi-final between Ihab and Moustafa was a one-sided affair with Moustafa showing he was a far stronger player.  The semi-final between Will Gee and Pauline Salib was a fascinating battle. Will started as strong favourite but Pauline played well, as did Will, in patches. However, Pauline seemed the more composed during a match where Will’s frustration often became evident. The match had an intense atmosphere as the strong Egyptian contingent knew that Will was all that stood between them and a guaranteed Egyptian victory. In the end, Pauline was more consistent took the match in three games to much bravoing from the Egyptians.

The final was played in front of a crowd of about 50 who gave warm applause to the many good shots played by both competitors. Fortunately, the weather was better and allowed everyone to sit lawnside without the need for multiple layers. In the end, Moustafa Nezar was simply too strong for Pauline and became a worthy World Champion. It is probable that he will still be young enough to defend his title in a couple of years. He will be a formidable opponent in the upcoming Worlds.

The event was dominated by the Egyptians and they were all eliminated from the KO by fellow countrymen.  Moustafa and Pauline gained the additional reward of securing places in the Golf Croquet World Championship to be held the following week in London.

Meanwhile those not fortunate to make their way through to the knock-out had been battling away in the plate and in the final Simon Gagnon from Canada beat Josh Smith of New Zealand.

The Hunstanton club did the event proud leaving no stone unturned in ensuring the event was a complete success and one which the players will remember, as they hopefully all graduate to the senior circuit.