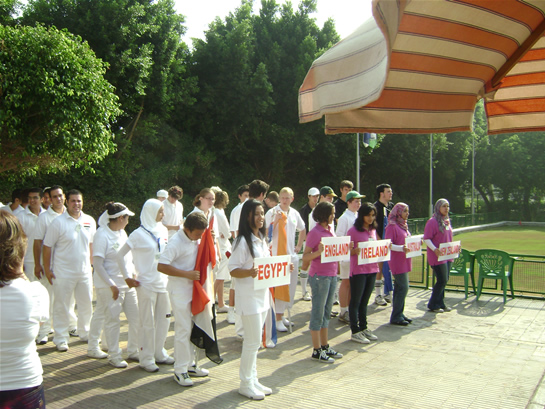 This is a really good event. We have an entry where 75% of players are trying to play high quality GC and probably 40% are succeeding. It is 10 times better than watching the pit-pat games at Cheltenham last month.  I watched two matches in detail yesterday.

The first was between Taha and McIntosh. McIntosh was always a hoop ahead in the first and had played very well with plenty of fine clearances. However, an excellent 12 yard power clearance at 11, gave Taha the edge and he took the first 7-5.  Mcintosh had bad luck at 6 and 7 in the second and despite a valiant attempt lost the second 7-5.

The last match to finish was Jarrod Coutts vs Malcolm Fletcher at 01.30. The first game was excellent with Jarrod always having the edge until he turned down a 5 yard hoop 13 in favour of a clearance and was unlucky to block his other ball from clearing Malcolms other. Malcolm duly ran his 5 yard hoop.  The second game saw Malcolm improve an his already excellent play. I know I have said it before, but whilst I think Robert Fletcher is an excellent player, I will not be surprised if Malcom is better still. All the Fletcher boys combine excellent physical skill with fine court presence and a sportsmanlike demeanour.

Elsewhere, Rachel Rowe had a fantastic win over Noura Nezar. Whilst the play wasn't as strong as in the two matches above, it was nevertheless a fine performance.

In terms of the potential winners, I have been very impressed with Ahmed Yasser (Yasser Esmat's son). I expect him to win the top half which is full of Egyptians.
In the bottom half, I'm hoping for a Dixon vs Keeman quarter final to guarantee a Kiwi medal. I expect the other quarter to be between William Gee and Robert Fletcher and believe that Robert is the favourite to reach the final.

However, it's Golf Croquet - so anything could happen!

The tournament is really hotting up now.
More congratulations for Rachel Rowe who beat Sandy Younan 7-6 in the third with a good hoop 13 under pressure. She was never likely to trouble Robert Fletcher who is now in the last eight. William Gee needed 3 games to overcome Kieran Murphy.

The big match was between the Egyptian number 1 Ahmed Yasser and Taha. This was a match full of power and aggression (in my opinion too much).  Many very fine shots were played, but several hoops were also failed. I find it difficult to judge between how good the very aggressive players are compared to the more balanced players. Anyway, after much good play, Taha won 7-6 in the third.  M. Taha will now play H. Shaker (who I haven't really watched yet) in one quarter

Malcolm Fletcher had a comfortable 7-5 7-1 win over Soha Moustafa to set up a quarter final against probably the best Egyptian left, Hamy Erian, who is a fine player.

Jared Keeman comforatbly beat A. Osama before playing James Goodbun in the last 16.  Having taken the first equally comfortable, Jared simply got worse with James playing some good 5 yard take-outs. The next two games were equally easy wins for James who should be delighted with a qf place.

The last match to finish (at 01.50) was between Duncan Dixon and Saher Tarek and was a thriller. The first went 7-6 to Tarek, but Dixon easily took the second 7-3 and went 6-2 up in the decider. Tarek came back to 6-4 before taking on 7 yard penultimate with Duncam 3 feet in front of the hoop. He ran this and then ran rover from 10 yards with Duncan 3 feet of front of that. With 40 people making as much noise as 40 people can whenever Tarek did anything during the match, Duncan now calmly took 2 foot position at 13 (to no Egyptian applause, just as there had been none for a fantastic jump shot earlier in the match). Misses from Tarek allowed Duncan to take the third 7-6 to eliminate the last Egyptian in the bottom half. This was a fine performance with some of the best tactical options I have seen from any of the players here. Duncan was pretty good up to 7 yards, but missed most of his longer clearances on the few occasions he felt compelled to attempt them.

The Egyptians left in a worried frame of mind since all the mixed nation matches went to the non-Egyptians yesterday.

Another fantastic day's play.
First game up was Taha vs Shaker. This was high power aggression with Shaker taking a close match.

Next was Hamy Erian vs Malcolm Fletcher. I thought that this was the best match of the event so far. Malcolm went game and 3-2 up, but Hamy is a really excellent balanced player and despite Malcolm hitting most of his 20 yarders in the rest of the match and running most of his hoops, 3 missed 7 yard clearances were enough for Hamy to squeeze a win.

Duncan Dixon and Robert Fletcher both had easy wins against James Goodbun and William Gee respectively.

The first semi-final was great. Shaker was on top form and won in straight games. When an aggressive power player hits their peak form, they are close to unbeatable.

Duncan vs Robert was a thriller. Both players played well with Robert taking the first and Duncan then raising his game in the second. Duncan ran 10 from the East boundary just south of the peg to take a 6-4 lead and subsequently level the match. The third was also close. It reached 4-4 and Duncan failed to get position at 9, finishing 2 yards West of the hoop. Robert now opted to play a cut rush on partner rather than taking 3 yard position, which I thought was an error. He rushed to 6 yard 20 degree position and failed the hoop to go 5-4 down. After some play at 10, Duncan ran the hoop from corner 4 to take a 6-4 lead, but Robert fought back to level at 6-6.
Duncan was now unable to get in front of 13 unless he jumped over Roberts ball a foot in front of him, so opted to dribble up behind it, Robert played away sideways, leaving the other 2 balls on the south boundary. Duncan played to the north boundary and Robert took 2 yard position. The other 2 ball both finished about 5 feet away at 15 degrees. Duncan cleared his 5 yarder by 20 yards to wired position.  Duncan now had a 5 foot hoop for a place in the final, but could only jaws it.  Robert now had a 5 foot jump shot for a final berth, but hit the crown so Duncan will now face Shaker in the final.

Hisham Shaker is the son of Iman El Faransawi (the reigning Women's GC World Champion) so this is the first opportunity for there to be current world champions from the same family.   It should be a great final. If Shaker plays at his best, he will win, otherwise Duncan may have the edge. The big question is can Duncan get into the match to apply the necessary pressure to Shaker.
Only time will tell - a great event.

As the pressure built before the final, we were treated to the play-off games for position. James Goodbun had some more excellent wins to take 5th place - a wonderful achievement.
In the 3/4th play-off, Hamy Erian beat Robert Fletcher. Hamy has impressed me throughout the event.

The final started at 7pm with Duncan winning the toss and taking 3 foot straight position with blue. After yellow had missed, he then ran the hoop to 4 feet in front of 2 which he duly converted into a 2-0 lead.

From that stage, Duncans play was excellent. He combined excellent positional play with good tactics, a range of mid to hard take outs and constantly ensured that Shaker was put under pressure. Duncan played within his comfort zone and his opponent failed to reproduce the standard that he had achieved against his Egyptian opponents the previous day.
Duncan won the first game 7-3 and the second 7-4.  At 2-2 in the third, Shaker was about to take on a tricky angled hoop 5 when he called himself for a fault (touching the ball). This was fine sportsmanship and he is to be commended.
The third game reached 5-5, but just as the crowd were building themselves up into a frenzy, Duncan ran a good penult to take a 6-5 lead. Shaker was always on the back foot at 12 and a two foot 12 saw Duncan Dixon become the first ever Under 21 GC World Champion - many congratulations.

After the prizegiving, we were treated to a Gala dinner where the four Kiwis sang their national anthem and then Coutts and McIntosh performed an excellent haka. Indeed, it was so popular, they did an encore!!

Great tournament. Well done to the WCF, the Egyptian Federation and to all the players who supported the event. I hope that England, Scotland or Ireland will look to hold another event in 2011.

The Group play has been completed in the first ever Under 21 World Croquet Championship. Players from five countries are represented in the Event (Egypt, England Ireland Australia and New Zealand.)

On day one the Egyptian players seemed to dominate but on the second day the visitors perhaps getting more used to the conditions played much better.  It seems to me that the Championship really is wide open.

Group Winners who receive a bye to the last 16 of the knock out were Ahmed Yaser (son of Yaser Esmat), Amr Elibyari, Soha Moustafa (who as a fifteen year old competed in the first Women’s World Championship in 2005), Hamy Erian and Saher Tarek -all of Egypt and James Goodburn(England), William Gee (England) and Robert Fletcher (Australia). 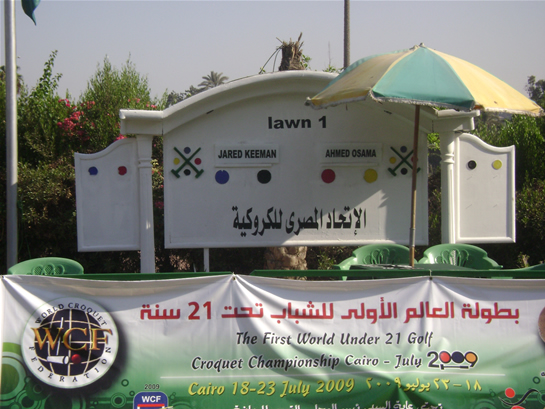 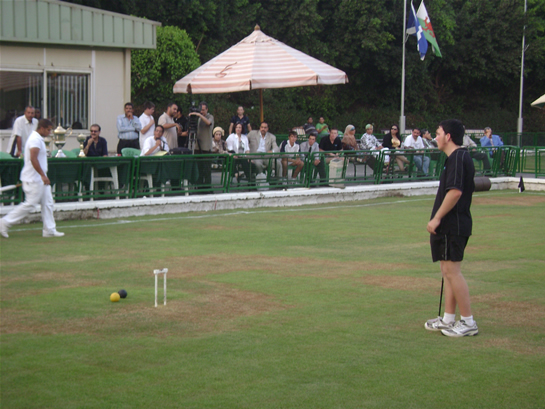 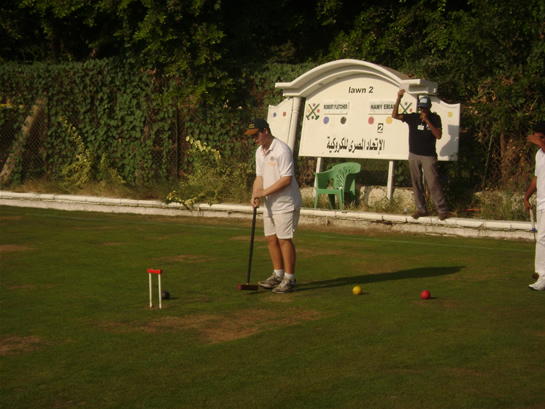 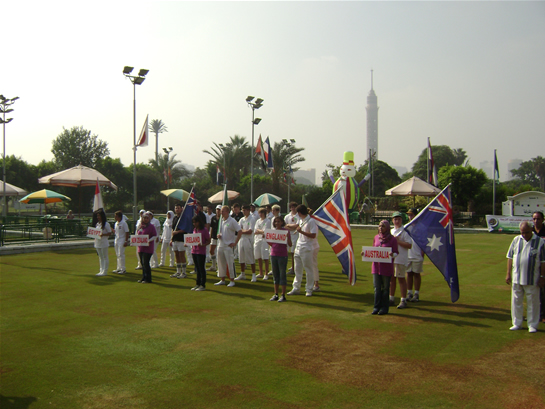 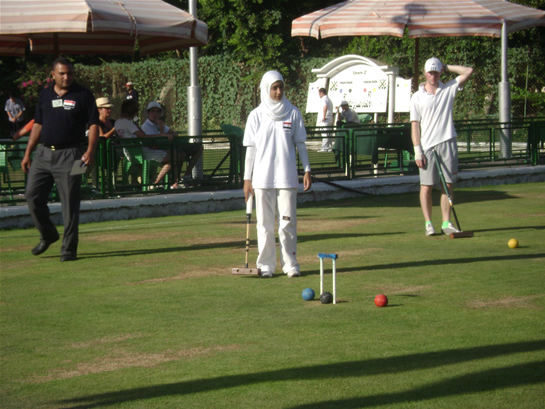