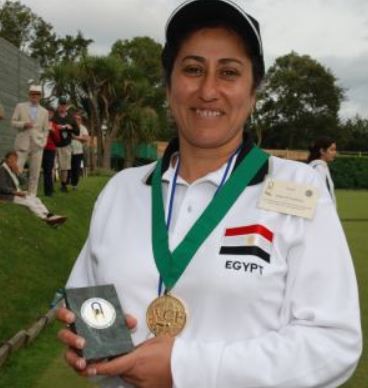 Tournament Report
9th September 2007.  Iman El Faransawy beat Marwa Moustafa in the final of the 2nd WCF Women's Golf Croquet Championship to become the new world champion.  In a thrilling final, watched by a large crowd at Carrickmines Croquet and Lawn Tennis Club in Dublin, she beat her fellow Egyptian 5-7, 7-4, 7-4, 7-3.

Presenting the prizes, David Openshaw, President of the World Croquet Federation, said that he had been delighted to see 40 players from nine different countries competing in the championship.

He said that it had been a pleasure to see such a high standard of croquet with top players from around the world taking part.  He thanked the Croquet Association of Ireland and the two host clubs, Carrickmines Croquet and Lawn Tennis Club and Herbert Park Croquet Club, for making the event such an outstanding success.

The gold medal was presented to Iman El Faransawy, silver to Marwa Moustafa and bronze medals to each of the two losing semi-finalists, Hemat Moustafa and Jenny Williams.