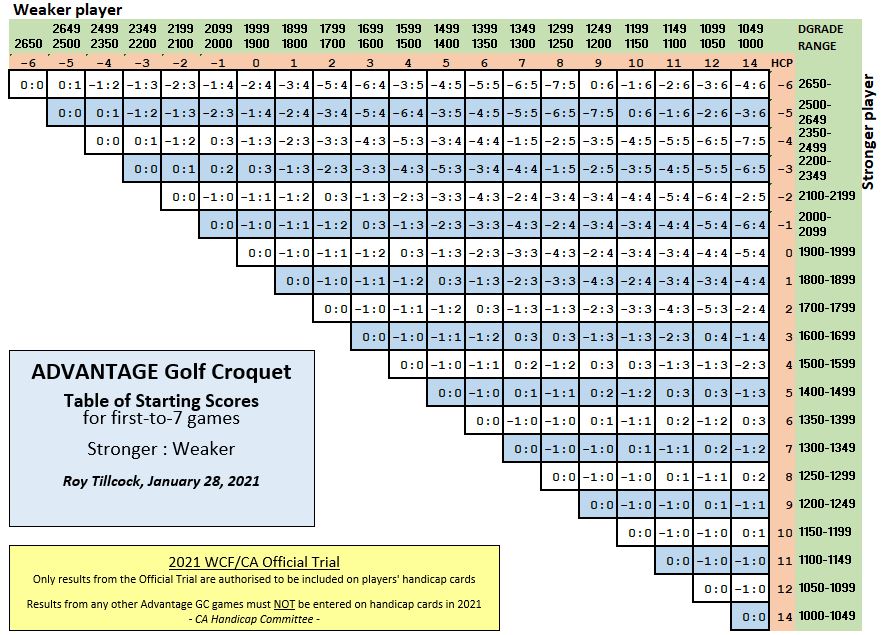 An invitation to Associations, clubs and players to try a new form of handicap GC

The Working Group has developed a form of GC which has been named “Advantage GC” which is described in the three documents below, namely (1) an introduction and outline of the game, (2) a table of starting scores for a GC handicap game which depend on either the handicaps or DGrades of the players and (3) the mathematical basis of the algorithm that generates the starting scores.

The MC believes that Advantage GC has an excellent chance of gaining general support amongst the playing community if they have the opportunity to try it out.  An official trial will take place during the English CA's Southern Federation 2021 League season.  However, players around the world are warmly encouraged to read at least the first two documents and try Advantage GC in their clubs and, if possible, in some handicap tournaments during 2021.

All participants in trials of Advantage GC are requested to send feedback to the MC about their impressions and observations and also provide game results which show the handicaps and/or DGrades of the players.  The MC would like to receive as much feedback and results data as possible by the end of 2021.  A dedicated email address has been set up for this purpose – advantagegc@worldcroquet.org